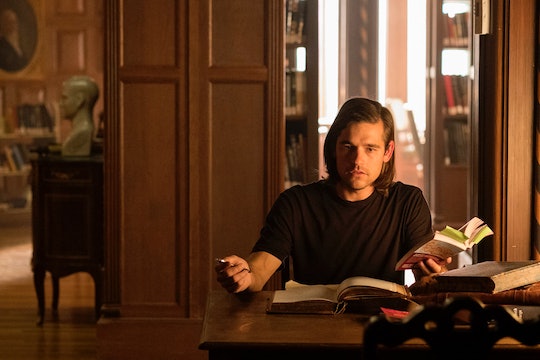 Quentin's Life May Be At Risk On 'The Magicians'

Oh Quentin, what are we going to do with you? Ever since Alice became a niffin and was forced to take up residence inside Quentin's body, life has become even more complicated for Mr. Coldwater. And judging from Wednesday's episode "Word as Bond," he could now be in for a world of danger. But does Quentin die on The Magicians? His fate is becoming a cause for concern, especially given the fact that Niffin Alice wants out of his body ASAP.

As they agreed upon during the whole bank heist debacle, Quentin signed a blood oath with Niffin Alice, allowing her to have free reign over his body for an hour each day — with a few stipulations, of course (no killing anyone, etc.). But it turns out that there's a very specific reason this Alice wants to take the wheel of Quentin's body so badly, and it's not just due to sheer boredom. She wanted to track down a very special niffin who is incapable of being boxed up. She wants him to teach her how to do that, so that she no longer has to be tied to Quentin until the end of time. And while I can understand her desire, it's hard to say what could end up being more harmful to Quentin.

On the one hand, Niffin Alice's rage to sever their connection seems to really be taking a toll on him. She more than proved during this episode that she could care less about his well being and would do whatever it takes to be free. So maybe having her on a tight leash is a good thing. That being said, it seems as though Quentin's body isn't doing so great harboring a niffin inside of it. When Alice was yelling at him in the priest niffin's house, his nose started bleeding. She claimed this was due to the fact that she's locked up inside of him and that it could end up killing them both.

This version of Alice isn't exactly what you would call "nice," but that doesn't mean she's not right when it comes to this. Maybe the repercussions of this tethered situation is finally rearing its ugly head, which means Quentin could be in serious danger if something isn't done about it and fast. Luckily, now Penny and Kady at least (sorta) know what's going on. Hopefully they'll be able to help Q find a solution for his predicament before its too late.