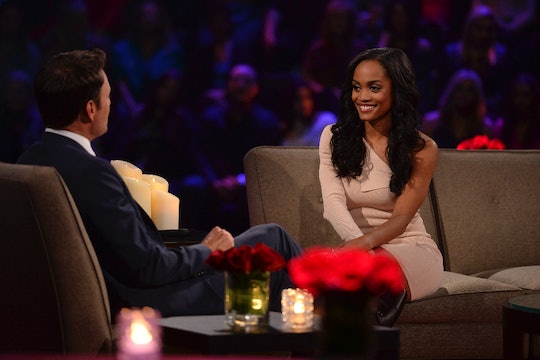 Rachel Will Open Up To Nick On 'The Bachelor'

With only two episodes remaining in the season, it's almost time to find out who Nick Viall chooses on his season of The Bachelor. Because of the strange timing for the announcement of the new Bachelorette, viewers can already rule out one candidate: Rachel Lindsay. Rachel is going to be the first black Bachelorette star when Season 13 premieres in May, meaning that (inexplicably) Nick dumps her at some point this season. That will definitely be hard to watch, but many are wondering just how hard. Does Rachel love Nick on The Bachelor? If she does, their on-screen break-up will be even rougher to watch than I'd already imagined.

Right from the start, Rachel and Nick hit it off well. He gave her the first impression rose on Night 1, cementing her as a frontrunner as well as a fan-favorite in the eyes of viewers. Their growing relationship has yet to hit any major speed bumps, with Nick reiterating time and again how crazy he is about Rachel. The couple even made it through what could've been a potentially very awkward, politically-charged discussion about race during the hometown visit to meet Rachel's family. That left fans wondering how, exactly, Nick wound up sending her home, freeing her up to become the next Bachelorette.

At the end of the hometown dates episode, it seemed that Rachel may have given us a hint as to the cause of their inevitable future breakup. She hadn't yet told Nick that she was falling for him and worried that she wouldn't have the chance to. The other two finalists no longer have that problem. Vanessa Grimaldi told Nick how she felt before hometowns (but didn't get a particularly strong response from him), while Raven Gates confessed the depth of her feelings during her fantasy suite date on Monday's episode.

Regardless of whether she's told Nick yet, Rachel has made it more than clear during her confessionals how she feels about him — she's falling for Nick.

Clearly, Rachel did fall hard. Appearing on Ellen after her role as the new Bachelorette was announced, Rachel confirmed that Nick does dump her in an upcoming episode and that she was "heartbroken" over it (though she's since moved on).

So, was the cause of their break-up Rachel's inability to vocally open up about her feelings to Nick? That certainly seemed like a strong possibility. But a recently released sneak preview of Nick and Rachel's fantasy date puts that idea to rest.

In the clip, after some encouragement from Nick to take a chance and open up to him despite feeling fearful and vulnerable, Rachel admitted that she was falling in love with Nick. The Bachelor responded, without any hesitation, that he was falling for Rachel as well.

While that's a super sweet moment and all, it just leaves me about a thousand times more confused about Nick's rationale for sending Rachel home. Without a doubt, his response to Rachel's confession of love was easily the strongest we've seen from him with any of the women. Something seriously game-changing must go down between their fantasy suite and the final rose ceremony for Nick to send Rachel home.