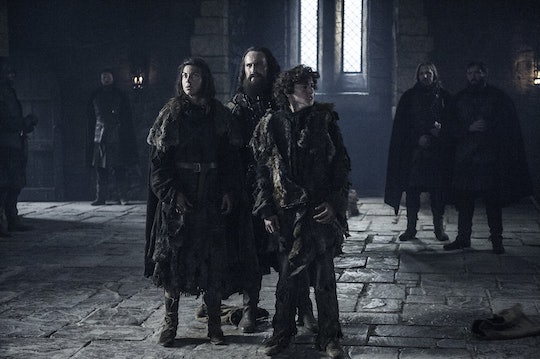 Does Ramsay Know The Umbers Aren't Loyal On 'Game Of Thrones'? He May Walk Into A Trap

So there are some fishy things going on with Smalljon Umber's grand presentation of Rickon Stark to Ramsay Bolton's as his "gift" for becoming Warden of the North. We haven't seen Umber or Ramsay since Rickon became his prisoner, but we do know that Ramsay penned a letter to Jon Snow, luring him and Sansa back to Winterfell with news of their little brother's imprisonment. This sets in motion the much anticipated Battle of the Bastards, as Jon ultimately heeds Sansa's urging and decides to try and rescue Rickon. But does Ramsay know The Umbers aren't loyal to him on Game of Thrones?

There are a few different theories that suggest Smalljon Umber is pulling one over on Ramsay. First of all, the Umbers have always been deeply loyal to the Starks. In the books, Smalljon actually dies at the Red Wedding protecting Robb, and his father is taken prisoner there. Fans were somewhere between outraged at the TV show's betrayal of his fundamental character trait, and suspicious that this plot point's complete departure from the books might mean it's a trick.

Smalljon refused to pledge loyalty to Roose Bolton, and quickly won Ramsay's affection telling him that his father was "a c*nt." But Ramsay is far more naive, single-minded, and unskilled in battle that Roose. In fact, he fails pretty hard all the time at everything except being a sadistic serial killer. It's hard to imagine that Smalljon genuinely believes Ramsay is a better leader than his father. He hands over Rickon as a gift in exchange for Ramsay's help in fighting off the Wildlings whom Jon Snow has allowed south of the Wall, but — very importantly — he refuses to swear loyalty to Ramsay.

This may just be because he doesn't want to officially declare loyalty to anyone but the Starks, but, it seems very significant nonetheless, and at least a sliver of hope exists that it's because he's using Rickon as bait. Instead of swearing loyalty, Smalljon hands over Rickon in exchange for Ramsay's word that he and his men will join the Umbers in protecting The North against a Wildling attack, should it occur. Smalljon knows that Jon Snow is leading the Wildlings (or he was), and he likely also knows that Ramsay would use Rickon as bait to draw Jon Snow back to Winterfell.

By giving Ramsay Rickon, Smalljon is basically ensuring that Jon Snow will return to Winterfell, likely with Wildling armies in tow. And now that Smalljon has Ramsay bound to fight against the Wildlings once they enter The North, he can use that promise to lure Bolton armies out of Winterfell — a notoriously difficult castle to attack — and out into the open land of The North, where Jon and the Wildlings will have a much easier time overtaking them.

Ramsay, not the greatest general and blinded by the opportunity to slaughter so many claims to the Stark throne, will hopefully never see this coming.