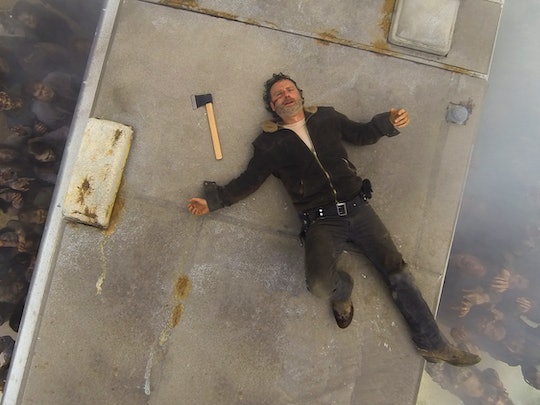 Does Rick Die In 'The Walking Dead' Comics? He Should Be Safe For Now

Rick is going through a tough time on The Walking Dead. To be fair, Rick is usually going through a tough time; living through the end of the world as you know it will do that to a person. Still, times are especially bad for Sheriff Grimes in Season 7 now that Negan has entered the picture and there's no respite in sight. Shouldering so much responsibility takes its toll, and lately it seems like Rick isn't just struggling — he's entirely broken. Negan knew exactly which buttons to push to crush Rick entirely, and it's hard to see how Rick will come back from this. But does Rick die in The Walking Dead comics?

Knowing a character dies in the comics can be really helpful when it comes to preparing for the inevitable. If you know a character's time is nigh, then it somewhat lessens the shock of their passing a bit. But when it comes to Rick – come on! Rick is the main character on the series. There's no way Rick is going anywhere any time soon, though, emotionally and mentally – there's no telling how far he could break. Fans have seen him swerve close to the edge before, but when it comes to the question of his mortality? He's so safe he might as well be immortal. I'm not even sure there could be a Walking Dead without Rick Grimes.

Rick is still going strong in the comics as well, though he is a little bit worse for wear than on the show. He takes some serious hits in the final big battle against Negan (specifically, a crossbow wound and a broken leg), but Rick's biggest injury happens long before he ever meets Negan surprisingly enough. During one of many showdowns with the Governor, Rick's hand is cut off, leaving him at a distinct disadvantage going forward that he has to learn to overcome. Though the show has hinted at the loss of Rick's hand (and almost nearly gave that fate to poor Carl), the storyline has yet to play itself out. (Warning, major spoilers from the comics are ahead. Proceed with caution.)

In the current timeline of the comics, Rick is still fighting the good fight as he rallies his people to battle against yet another group of violent enemies, this time a group called the Whisperers. The Whisperers disguise themselves as zombies, allowing them to move freely through the world, and they also strike against the assembled communities (Alexandria, Hilltop, the Kingdom, and the reformed post-Negan Sanctuary) by beheading a bunch of people – including Ezekiel and Rosita.

But even though The Walking Dead is a show that constantly insists no one is safe, you can rest easy with the knowledge that Rick Grimes is the most likely to live to fight another day.