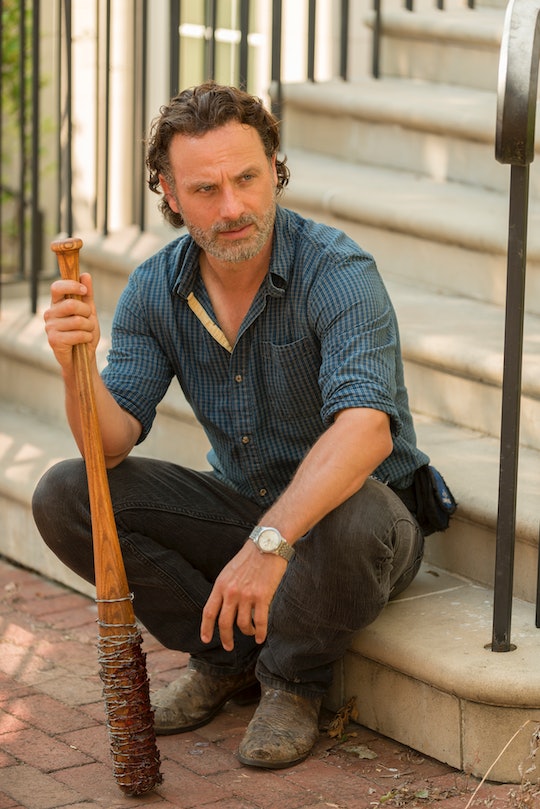 Does Rick Fight Back In 'The Walking Dead' Comics? Negan May Not Be In Charge For Long

Despite everything Rick has been through on The Walking Dead (and he's been through a lot), he's always been able to claw his way out of trouble somehow. Even when the odds of survival are stacked against him, Rick manages to save himself and his people time and time again. However, that doesn't seem to be the case in Season 7 so far. Initially Rick was ready to take on Negan, but his every attempt to stand up to the Saviors only ended in more bloodshed. It's left Rick skittish and acquiescent, but knowing him that can't possibly last forever. It certainly doesn't in the comics. So does Rick fight back in The Walking Dead comics?

Rick did eventually triumph over Negan in the comics, which should come as no surprise: he is the hero of the story, after all. However, the circumstances of his rebellion and eventual victory are a little different, even though the show is still in the early days of the story now. On the show, Rick conceding to Negan seemed genuine; he gave up every gun they had in Alexandria, even the ones Negan didn't know about, and kept his temper in check no matter who Negan insulted. He refused to even concoct a plan to get out of the situation. However, in the comics, Rick did have a plan.

While Rick did go along with Negan's demands in the comics, the tone of the situation was very different. Comic Rick only gave in on the surface. His plan was to play along until his people were strong enough to battle the Saviors; he never had any intention of not fighting back. He stockpiled supplies. He made secret alliances with Ezekiel and Hilltop, and he accepted a double agent deal with Dwight that left him with a man on the inside of the Sanctuary. Eventually he had everything in place to secure his victory.

This is a marked change from TV Rick, whose trauma has taken over right now and rendered him incapable of striking back. It's an interesting shift, and an understandable one; after the hours of physical and psychological torture Negan inflicted on Rick and his crew in the premiere, it makes sense that Rick can't just shake it off. His sense of responsibility for what happened is likely weighing on him too, because the casualties of the premiere might have been averted had Rick not taken out a safe house full of Saviors in the first place.

This doesn't mean that Rick is out for the count, though. When Negan was stalking around Alexandria in "Service," there were flickers of the old Rick every time his hand tightened on Lucille's handle. Like many heroes, Rick will likely be broken down just so it'll be all the more satisfying when he finally does rise up again. But until then, maybe Rick should take a nap and let Michonne handle things for a while. She's one character who is ready for a fight.