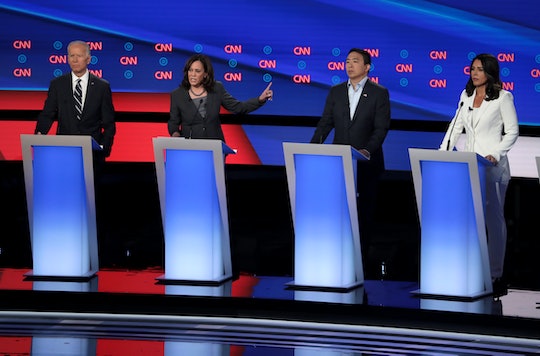 School segregation was among the many topics discussed during the second round of Democratic debates on Wednesday night. The candidates addressed how children in the United States all deserve the opportunity to educational success, pointing out that school segregation still exists today. In fact, according to a new report from NPR, millions of kids in the United States attend schools that are "racially isolated."

During the debate, former Vice President Joe Biden and California Sen. Kamala Harris got on the subject of busing, a solution to segregation enabled in 1971 that started bussing black students to predominantly white schools and vice versa, according to CNN. Colorado Sen. Michael Bennet brought the conversation back to modern day, demanding they talk about what's happening in schools today. "We need a conversation about what's happening now," he said.

Presently, nearly 1 in 5 public school students in the United States attend a public school that is racially isolated and are significantly underfunded compared to schools located just miles away from them, according to data compiled by EdBuild. Because schools depend on local taxes, the communities these schools are in play a huge role — high poverty schools get less funding, therefore putting the schools at a disadvantage. And almost all of these schools have a significant racial divide, the report found.

Income inequality plays a huge part in modern day segregation. A February 2019 report from EdBuild found that predominantly non-white school districts received $23 billion less in funding, according to The New York Times. The report found that these districts also serve over three times as many students as white districts, therefore forcing them to spread their resources over a large number of people.

Additionally, a 2016 study conducted by the U.S. Government Accountability Office found that the economic and racial divide continues to grow with each school year — 75 to 100 percent of students in these economically disadvantaged schools were eligible for free and reduced lunch. The study found that these schools offered fewer math, science, and college prep courses for students, according to USA Today, placing less of an emphasis on educational opportunity.

These school districts remain largely segregated due to a 1974 Supreme Court case, which ruled that school districts didn't have to desegregate across district lines if the lines "weren't drawn with racist intent", according to Vox. Therefore, these racial disparities are remaining without any effort to remove them.

Some candidates this year have come out in favor of desegregating schools. Harris, Sen. Bernie Sanders, Sen. Elizabeth Warren, among others, have all expressed that they want schools in the United States desegregated, according to Chalkbeat. But, it's unclear how exactly many candidates will put their words into action.

More funding across these districts could help provide an equal educational opportunity to students, according to The New York Times, as well as giving these students more attention and time to flourish, as The Atlantic explained. Now that this issue has been pushed to the forefront, courtesy of the debate, underprivileged students and schools are getting the attention they deserve and plans to support them will hopefully be addressed further throughout this election cycle.