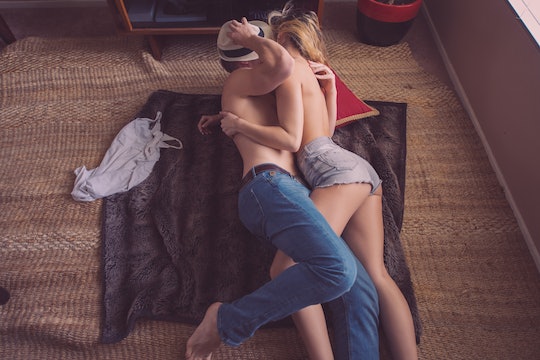 Does Sex Hurt With A Tilted Uterus?

There are many anatomical variables that women have to contend with, especially with regards to her reproductive system. Maybe you suffer from debilitating cramps, maybe you've dealt with cysts or fibroids, or maybe your uterus is tilted slightly backward. For every variation or potential problem, there are consequences, to some extent. Painful cramping, for example, could be a sign of uterine fibroids or endometriosis. When women with a tilted uterus learn about their condition, they may wonder, does sex hurt with a tilted uterus? This is especially true if they've experienced painful sex in the past.

According to the International Society for Sexual Medicine (ISSM), most women have a uterus that is slightly forward-leaning. For some, however, the uterus is tipped slightly backward toward the spine, which is what is known as a tilted or retroverted uterus. It's not all that uncommon. In an interview with Women's Health, OB-GYN Dr. Mary Jane Minkin said that about 30 percent of women have a tilted uterus. As previously mentioned, it's likely that if you fall into this 30 percent, but haven't been told by a gynecologist that your uterus is tipped, you don't even know. However, one potential clue that your uterus may be oriented differently is experiencing period cramps as back pain rather than abdominal pain, as Dr. Paul Joannides, a research psychoanalyst and author of Guide To Getting It On, wrote in a post for Psychology Today. Another possible sign? Painful sex.

In an interview with Shape, Dr. Kenneth A. Levey, a professor of gynecology and pelvic pain specialist at New York University, said that pain during sex can be caused by the penis hitting the top of tilted uterus. Changing positions to prevent that from happening can help prevent unnecessary pain. So which positions and techniques can cause problems?

Every woman is different, however, so asking questions of your partner or being forthcoming about pain is important. Sex isn't supposed to be painful and it doesn't have to be, even if you have a tilted uterus.