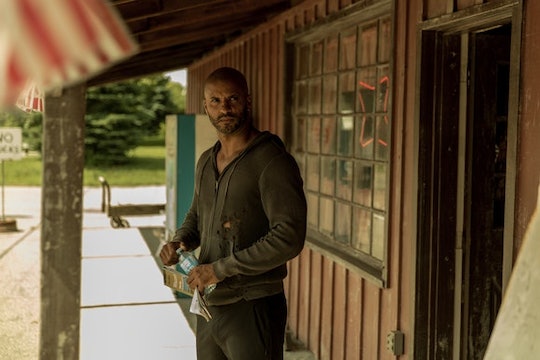 Shadow Can Do Some Pretty Impressive Magic Tricks On 'American Gods'

There have been several hints throughout the run of American Gods that Shadow Moon might have special abilities. In the third episode of Season 1, it seemed like Shadow managed to summon a snowstorm, which would certainly be beyond the capabilities of a normal mortal man. But does Shadow have special powers on American Gods?

That's still up for debate, but Shadow does seem capable of doing some rather magical things. The snowstorm is perhaps the biggest point in his favor, but it's something that can also be easily disproved. Reddit user detcadder speculated that the storm was actually Mr. Wednesday's work; Wednesday needed Shadow to pray for snow so that he could grant the prayer and make it happen. "Wednesday was gaming the system, by setting up the prayer he was going to answer," they wrote.

Another Redditor, PurpleWeasel, pointed that that Wednesday is a conman. It's impossible to fully trust anything he says, so it's believable that he would actually be responsible for the storm and that he would want Shadow to think it was his doing. Maybe he wants Shadow to think he has powers because it fits into some greater part of his plan, or would convince Shadow to stick it out with him despite any misgivings.

But while the hints about Shadow's powers are pretty vague, it's also undeniable that something is going on with him. In the second episode of Season 2, there was a flashback to a childhood run-in Shadow had with Wednesday. In it, Wednesday told him that "magic takes years for most people," which could have been an indication that Shadow's powers would be manifesting much later in life. Which is exactly what seems to be happening.

Slowly but surely, Shadow has been able to do some extraordinary things, even if it's hard to pin down what that means with any kind of specificity. He occasionally has prophetic dreams and knows about events before they happen. He also has a very strong, mystical connection to Laura. He emanates a golden glow that she's able to follow across vast distances. When they kissed, it made her heart beat again.

And in "A Murder of Gods," when Wednesday told Shadow to think of Laura, he was able to visualize exactly where she was and what she was up to. His eyelids glowed while he was doing it. If that's not a sign of some latent magic ability, then I don't know what is. The fact that Wednesday is so particularly invested in Shadow is a tip-off, too. I doubt a god would waste his time with a mortal unless they were important.

American Gods is based on the book of the same name by Neil Gaiman, and book fans might have more insight on what makes Shadow so special. But so far the show is still scattering breadcrumbs as they lead the audience closer and closer to the conclusion. The extent of Shadow's possible abilities isn't clear, but he's still on the journey that's going to reveal exactly what he's capable of.