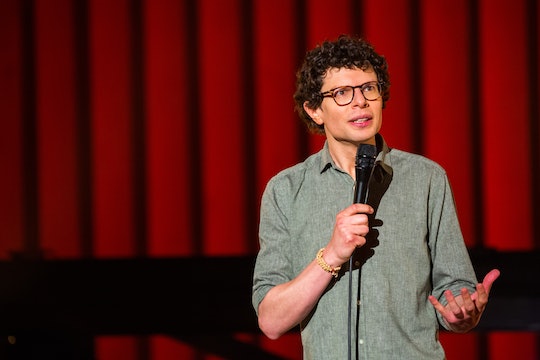 In his Netflix comedy special, Simon Amstell shares his most vulnerable moments, as he explores his struggles with identity, issues with his father, and his mind-altering experience with ayahuasca.The comedian bares his soul in Simon Amstell: Set Free, and after hearing him talk about his romantic encounters, you might be wondering if he has someone special in his life. So, does Simon Amstell have a boyfriend?

In the 50-minute stand-up special, Amstell mentions his boyfriend in passing, but doesn’t give any specific details about him. However, in an interview with Out, the British comedian revealed that he’s been dating the same man for about seven years, and they met right around the time Amstell did ayahuasca in Peru, and got over his depression. “They happened at about the same time,” he said. “It's not a controlled experiment. However, my hunch is if I hadn't have gone to Peru, the relationship wouldn't still be a thing that's happening. I think I probably would have made mistakes over and over again. I did meet someone so incredible that he would've been very good about me being deranged, but ultimately it wouldn't have lasted as long as it had.”

Amstell also told the outlet his relationship has lasted so long because both he and his partner have remained open and honest about everything. “[We’re] Talking about everything that feels scary to talk about,” he explained. “And we're not lying to each other. There's no deception going on. Everything that needs to be discussed ends up being discussed. It sometimes takes a minute, but eventually the truth comes out.”

When talking to Attitude, Amstell revealed how he tried to find his own struggling- 18-year-old self in other men, but after a series of failed relationships, he finally realized he needed to be with someone who was emotionally whole. “The boyfriend I have now – is that the way to say it? – the person I’m with now doesn’t need to be fixed,” he said. “There was no point where I thought, ‘I better go and help that guy’. He is fine. He had a happy childhood and is a highly educated, brilliant, handsome human being.”

He said there was a moment when he thought, “This guy doesn’t need me, what am I doing, I’ve got nothing to do here, no advice to give, I’ve got nothing,” but he eventually move passed it. “When I got over that anxiety, there was this ease,” Amstell said. “I could breathe. We could just have a lovely time together without this panic that something needed to be fixed, that someone needed to be saved.”

On his Instagram page, Amstell hasn’t shared any obvious photos of his boyfriend, so it’s hard to say exactly who it is. It’s safe to say he wants to keep his partner’s identity private for now, which means you’ll just have to get the dish on his love life through his stand-up and interviews.

More Like This
'Blockbuster's' Randall Park On Smashing The Model Minority Myth & Advocating For His Daughter With Autism
'Workin' Moms' Has An Official Release Date For Its Final Season
'Wednesday' Creators Say They're "Talking Amongst Ourselves About Season 2
'Virgin River' Has Wrapped Filming Season 5 & OMG Is Charmaine Still Pregnant!?