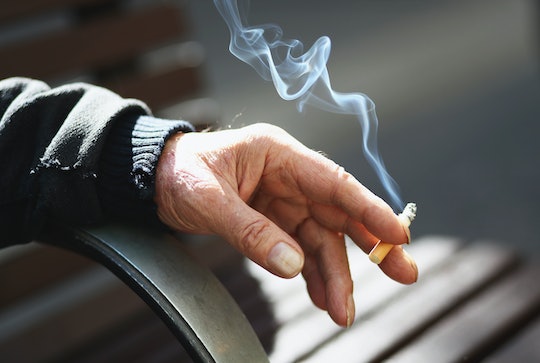 Does Smoking Lead To Autism?

Even as more and more people are affected by autism spectrum disorder (ASD), so many mysteries still surround the neurodevelopmental conditions it encompasses. At the top of that list is what actually causes children to display its hallmark traits, such as poor communication skills and repetitive behaviors. So, the researchers behind a recently published study set out to determine whether smoking leads to autism — and found that there appears to be a connection. But the familial connection between a baby's likelihood of having traits associated with autism or being diagnosed with ASD is a bit further removed than one might expect.

That's because the researchers from the University of Bristol who conducted the study concluded that it's the cigarette smoking of a maternal grandmother while she was pregnant that was linked with autism two generations down the line. Specifically, girls whose grandmothers smoked when they were carrying the girls' mother were 67 percent more likely to exhibit traits associated with ASD and a full 53 percent more likely to actually have a diagnosis, according to The Telegraph.

This "Children of the 90s" study followed about 14,500 participants, but scientists are still unsure why only girl babies — not boys — were the only ones included in this phenomenon.

In fact, study coauthor Professor Marcus Pembrey said that, so far, there is "no explanation" for this difference, according to Science Daily. But they do have some insight as to why there is an "intergenerational effect" associated with maternal grandmothers and their grandchildren — if not specifically granddaughters.

It has to do with a critical part of the cell that's passed down only from mothers. "More specifically, we know smoking can damage the DNA of mitochondria — the numerous 'power-packs' contained in every cell, and mitochondria are only transmitted to the next generation via the mother's egg," Pembrey explained. "The initial mitochondrial DNA mutations often have no overt effect in the mother herself, but the impact can increase when transmitted to her own children."

Even though girls are the ones affected by this phenomenon, boys in general are much more likely to have ASD than girls. Autism incidence among boys is anywhere from two to five times higher, and a 2017 study suggests that this could be due to differences in brain structure between the sexes.

According to the Centers for Disease Control and Prevention, an average of 1 in 68 children have ASD. That statistic, first reported in 2014, is a 30 percent increase from two years before. It's unclear exactly why the number of children is climbing, but one theory is simply that a greater awareness is leading to more diagnoses.

Still, any information on what causes autism — such as smoking — is an important piece of the puzzle to crack the code.