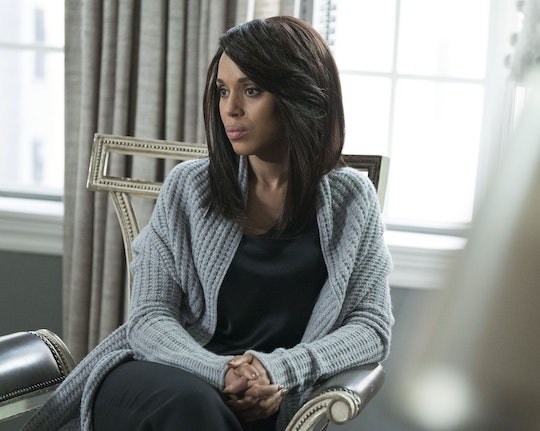 The 'Scandal' Series Finale Could End With One Final Death

With Scandal coming to a close, fans can't stop theorizing how the series will end. However, with creator Shonda Rhimes behind the wheel, it's impossible to really guess what will happen. The series has become known for its twists and not being afraid to kill off a character or two. Because of this and Olivia's shocking gasp in the finale promo, fans can't help but ask: does someone die in the Scandal series finale?

The odds are definitely in favor of someone not making it out of this finale alive. The real question should be who will die, and for that, there are some top contenders. The first is Charlie. Poor Charlie got swept up into Cyrus' plan to impeach Mellie and has been beaten up and then threatened all while being held captive by Cyrus. Even though Charlie took Jake's deal to confess to hijacking Cyrus' plane and saying Mellie hired him, Charlie still hasn't been let go and the longer he's kept underground the less likely it seems he'll be set free, especially now that Olivia & Co. are going after B613.

Jake has made it clear he's not above killing people just because they annoy him. It wouldn't be surprising if Jake decided the best way to get back at Olivia would be to kill Charlie, Quinn's baby daddy and fiancé. What better way to fracture the group than by killing someone they all care about? Thus, it definitely seems likely that Charlie is going to die, which is unfortunate, but if I'm being honest it's not something I'll cry over.

Alternatively, perhaps Jake will die so that Charlie may live. Rhimes has done a thorough job of tearing down Jake's character and anyone that was still Team Jake had to realign their priorities. Besides the fact that he turned his back on Mellie, he then killed his wife, Vanessa, just because he was irritated with what she was saying. While you could possibly justify every other murder Jake has done, there was no denying that he killed Vanessa simply because he could, which turned Jake's skills as a killer from a necessary evil to just plain evil. It'd be a righteous kind of justice if someone ended up killing him in the end, and there are surely a number of people who'd love to do the job.

Perhaps Charlie somehow gets his hands on Jake and decides to pay him back for all the torture he went through. Or maybe Quinn and/or Huck get to Jake first, taking him out once and for all. It's even possible Cyrus gets tired of Jake, maybe even blaming him for his plan going south. That would also be long overdue revenge for Jake killing Cyrus' husband, James, so many seasons ago.

There are a number of people who may be out for Jake's blood, but is anyone really up to the task to take him out. Jake has now proven that he's maybe smarter than anyone had given him credit for. While it'd be nice to see him get what he deserves, it may be even nicer to see B613 come crumbling to the ground and Jake ending up in jail for the rest of his life.

Besides Charlie and Jake, it's also possible Cyrus ends up killed, though he seems like the least likely option. Mellie's first VP already ended up dead, so if Cyrus dies that probably wouldn't look good for Mellie, especially with everything else currently going on. Thus, if anyone was going to die, my money's on Charlie or Jake. However, with Scandal, you never really know what could happen, so it's probably best to assume no one's safe.