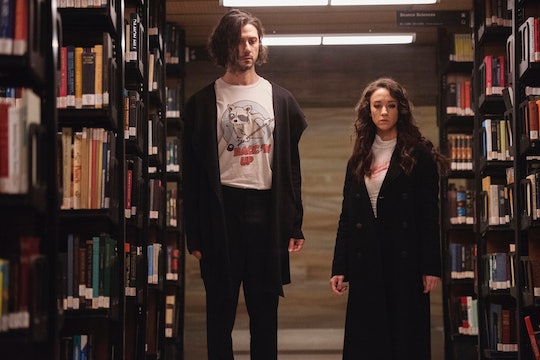 Someone May Not Survive 'The Magicians' Season 4 Finale

Things were dire enough on The Magicians when just one of the characters was possessed by an amoral monster, but now both Eliot and Julia have unwillingly become the Big Bads. The monstrous siblings who have taken over their bodies aren't shy about murder, which means it's increasingly likely that someone will die on The Magicians. The big question is: who?

Technically, quite a few people have already died at the hands of the Monster Siblings. "The Secret Sea" was basically a Library massacre, and Our Lady Underground joined the long list of gods taken out by the Monster. So far none of the main characters have bitten the dust, though it doesn't look like everyone will survive the season. With stakes this high, there are bound to be casualties.

Eliot and Julia may be alive somewhere inside their bodies, but they're being operated by villains. That means one or both of them could die in an attempt to rescue them and put a stop to the Monster Siblings. Eliot was almost killed earlier in the season, so the possibility is certainly out there. But I can't think of anything less satisfying than killing off Eliot after he was MIA for an entire season. And after everything Julia has been through, she doesn't deserve such an unceremonious end.

Many fans seem to believe that Quentin will be the one to die. Reddit user starrylibra pointed out that he has a penchant for sacrificing himself to save his friends. He was ready to give up his freedom to keep the Monster company at the end of Season 3, so he may give up his life to save everyone else this year. It's also a typical narrative trope for a character to die right when they've experienced major growth. Plus, The Magicians went out of its way to call out the need for white male protagonists in "A Timeline and Place" by highlighting secondary characters. The show may not feel like it needs Quentin anymore.

But on the other hand, Quentin's story feels far from over and he's long been positioned as the unifying character of the series. The Magicians is very much an ensemble, but Quentin is often the anchor. And killing off a queer character is a trope that very much needs to be retired; it would be especially cruel coming right on the heels of his relationship with Eliot becoming more explicitly romantic.

There are other theories out there, too. Redditor Zebariah thought that Librarian Zelda may be the one to go in the finale, and that makes a lot of sense. Her character has grown a lot over the years and acquired a lot of depth; viewers have learned enough about her to feel sympathetic towards her despite the many awful things she's done. She's starting to question the organization she devoted her life to and struggling to make the adjustment. If she died right when she was about to redeem herself — or even sacrificed herself for everyone else — it could be both tragic and meaningful.

Of course, in a world of magic and gods, just because someone dies, it doesn't mean they'll stay dead.