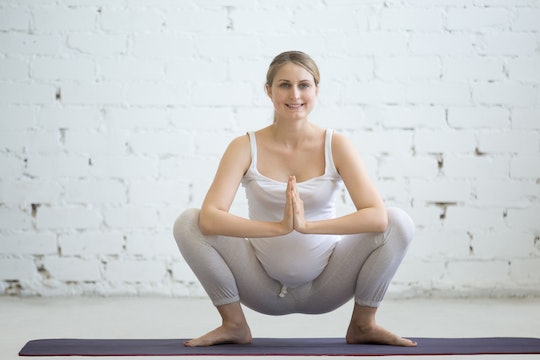 When I went to my 36-week appointment with my daughter, I got the worst news — she was breech. That little girl had been head-down for weeks, and suddenly, she decided to do a little flip and sit on my pubic bone. I tried everything, including all the old wives' tales. I even went to the chiropractor several times. In the end, only an external cephalic version got her moving. But many of the tips to flip her were exercise-based. So since squatting is so popular during pregnancy, it makes sense to wonder, does squatting turn a breech baby?

Squatting is a great exercise to move your baby further into the birth canal, and prepare your pelvis and hips for the movements of labor and delivery, according to the American Journal of Obstetrics and Gynecology. However, squatting while pregnant with your baby in a breech presentation only serves to move your baby into a further breech presentation, possibly dropping them deeper into the birth canal, making a rotation of their position more complicated and less likely.

Squatting was one of my favorite exercises when I was pregnant. With my pubic bones aching, and my hips screaming, it seemed to relieve the pain while allowing me to break a sweat and relax. At the time, I was unaware that doing so would drop my baby further into breech.

I spoke to doula Ellen Lee of Brooklyn, New York about turning breech babies, and asked her if the rumor about squatting actually helps. Turns out, that's a big nope. She actually says to avoid squatting if your baby is breech. "The best exercise for turning a breech baby is to get on all fours and tip your hips up and down, contracting your abdominal muscles, and really stretching your spine." Lee says you shouldn't do anything percussive like squatting or the stair master, as they might cause your baby to get even more comfortable and wedged in your pelvis in the wrong direction.

Another popular remedy seems to be burning mugwort by your pinky toe, a technique known as moxibustion, according to Science & Sensibility. I've read Harry Potter and I know that mugwort, also known as wormwood, is used in poisons and shrinking solutions. Heck, moxibustion even sounds like a Hogwarts potion (ask Neville), so maybe that means it's truly worth trying. Or if you want to skip out on searching for some fancy herbs in an effort to flip your baby and eat chocolate cake instead, that works.

Whatever potion you come up with or exercise you aim to complete, squats won't be your best choice. They're not going to turn your baby, and in fact, can do a lot of damage if you want your baby to turn. Work with your OB-GYN or midwife and see what they ask you to do. Granted, the external cephalic version (where they manipulate your baby from outside your body) isn't fun, but it worked for me, and maybe it can work for you. Or you could try using your wand.

More Like This
These Baby Boy Names That Start With "B" Are The Best
The 21 Most Popular Baby Names Of 2021 In The U.S.
Am I Ready For A Baby? 9 Questions To Ask Yourself
What You Need To Know About Using Hair Removal Cream During Pregnancy