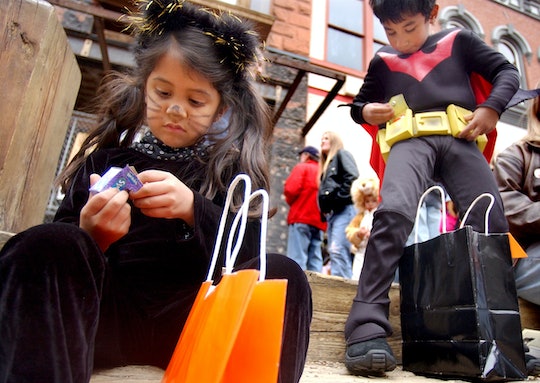 I have the biggest sweet tooth, and I've passed it down to my daughter. It's not ideal — especially at Halloween when she won't share her candy. And, with all the scary costumes, she'll probably have a hard time falling asleep, but, does sugar give kids nightmares that could compound the problem? And more importantly, does that mean more Snickers bars for me?

I spoke to Dr. Clay Jones, pediatrician, and contributor to the Science Based Medicine Blog, and he tells Romper that he hasn't heard that. He says, "I imagine that there would be confirmation bias playing a role, where people forget all the times that kids have sugar and don’t complain of nightmares and remember the few that they do."

It's not unlike when you go to a restaurant a million times, and one time you have truly terrible service, and forever associate that restaurant with bad service. On Halloween, it's even trickier. Not only are your children likely changing their patterns dramatically, but they're indulging quite a bit more than what they normally would. On Halloween, many of our kids stay up late, they're running around all over the place, they are encountering things they never usually see — as a whole, they are generally just amped up.

Having a nightmare is something that you might expect to happen, given the circumstances, but because the thing we most associate with Halloween is candy, that's what we choose to blame — not the chainsaw-wielding porcelain doll that was hanging out near the school yard.

As someone who suffers from nightmares, I can understand how we might want to look for a boogeyman to blame. The Cleveland Clinic wrote on their website that "it is often difficult for children to separate a nightmare from reality, even after your child awakes from the nightmare," making it doubly hard to deal with. When you or I have a nightmare, we're more prepared. We can wake up, look around, and understand that it was all a dream, even if it affected us deeply.

As for what brings nightmares on, the Cleveland clinic wrote, "Nightmares can happen for no known reason, although they sometimes appear to stem from your child seeing or hearing something that upset him or her during the daytime." In essence, it was the jerk who dressed up as a vampire Michael Phelps, and not the KitKat you just took from their orange bucket. (I'm not suggesting that you put it back, though.)

Does sugar give kids nightmares? Probably not, but it's not off the hook for a whole host of other potential problems, ranging from childhood obesity to dental caries, noted the American Academy of Pediatrics (AAP). "The average child eats and drinks much more added sugar than he should. On average, sugar makes up 17 percent of what children consume each day," the website noted. On Halloween, that percentage is way, way higher. (And to be honest, the days following as well.)

The AAP wrote on their website that it's best to try to limit your children's added sugar and focus on whole foods, but this time of year, it's hard to adhere to such strict guidelines — if not outright impossible. Therefore, it might just be best to chill out with a fluffy, low stakes cartoon before bed, leave a nightlight on, and go look for that chainsaw-wielding porcelain doll, because holy crap was their makeup fantastic. This is the true joy of the holiday. That, and the Butterfinger you just pocketed.