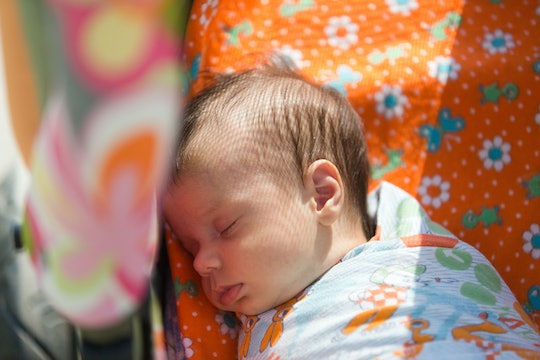 Here's The Deal With Swaddling & The Moro Reflex, According To Experts

Swaddling isn't just a cute way to present your newborn to friends and family members. Yes, there's truly nothing better than a baby burrito, to be sure, but there's actually a few key benefits to wrapping your little one tightly in a receiving blanket. Promoting safe, comfortable sleep is the name of every new parent's game, but does swaddling help the Moro reflex? If you're a new parent looking for some reprieve and a little rest, there's definitely a few things about swaddling you need to know.

First thing's first, of course. What exactly is the Moro reflex? According to Healthline, babies are born with a number of reflexes, including rooting, sucking, grasping, and stepping. The Moro reflex is another natural impulse your baby is innately born with, in which, according to Healthline, your baby intuitively responds to being startled. The site goes on to explain, saying:

"If your new baby is startled by a loud noise, a sudden movement, or feels like he’s falling, he might respond in a particular way. He might cry and suddenly extend his arms and legs, arch his back, and then curl everything in again."

An example of the Moro Reflex can be seen below, in which a newborn responds to the feeling of falling by quickly throwing their arms out to the side:

While it's, honestly, a little difficult to watch a brand new baby respond in such a way, The American Academy of Pediatrics (AAP) assures new parents that the Moro reflex, while completely normal and necessary, is also also temporary. The AAP goes on to say, "The Moro reflex, which may be present in a varying degrees in different babies, peaks during the first month and then disappears after two months."

This perfectly normal reaction can also disrupt a baby's sleep. This, of course, is when a swaddle can be extremely beneficial. In fact, The Baby Sleep Site advocates for the use of swaddling to keep babies calm and promote sleep, especially when they're impacted by the Moro reflex. The site continues to explain, saying:

"Swaddling helps a lot to keep them calm and relaxed especially when they haven’t outgrown the Moro/startle reflex where their limbs 'jump' uncontrollably."

While swaddling has numerous positive benefits, including mimicking the feeling of being in the womb and decreasing the number of times your baby could be startled and evoke the Moro Reflex, it's vital that parents practice safe swaddling techniques. According to Health Children, The Pediatric Orthopedic Society of North America, with the AAP Section on Orthopedics, promotes “hip-healthy swaddling" that allows the baby’s legs to bend up and out. The site goes on to detail how a parent can safely and affectively swaddle their baby, which includes the following:

"Fold or twist the bottom of the blanket loosely and tuck it under one side of the baby. Make sure her hips can move and that the blanket is not too tight. You want to be able to get at least two or three fingers between the baby's chest and the swaddle."

With a little practice, and the benefit of helping your baby through the Moro Reflex period, you'll be one step closer to some necessary sleep. Well, hopefully.