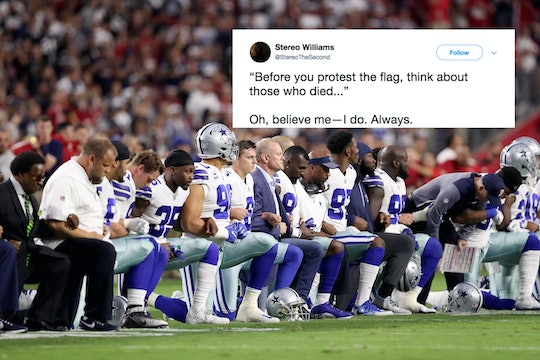 When former San Francisco 49ers quarterback Colin Kaepernick first began kneeling during the national anthem last season in an act of peaceful protest against racism and police brutality, it naturally sparked a big debate. But it was nothing compared to the controversy that ignited last week, when President Donald Trump decided to offer up his take on the issue. At an Alabama rally Friday, the POTUS insisted the move was unpatriotic, according to The Independent, and said "Wouldn’t you love to see one of these NFL owners ... say, ‘Get that son of a b*tch off the field right now'?" But does "take a knee" insult people who died for the country? Trump and his supporters may think so, but many veterans have actually come out in solidarity with the growing movement. Because while the president may think that "take a knee" is about the anthem or the flag, the reality is that he's actually missing the point completely, and one of the below tweets shows exactly why.

More Like This
The Obamas’ New Family Rule? Get Vaccinated If You Want To Hang Out With Us
Biden Proposes Plan To Give Every Child Free “High-Quality” Preschool
Every Adorable Photo Of Prince Louis
Apple Card Family: How It Works & What Your Kids Can Learn

Trump no doubt knew exactly what he was doing when he raised the issue of the NFL protests in Alabama — many of his supporters have long taken issue with Kaepernick and other players who joined him, viewing the demonstration as disrespectful, and dismissing the idea that the need to protest racial inequality (and specifically, the police shooting deaths of black men in America) was even necessary.

On Twitter following the uproar over his rally comments, Trump doubled down, and wrote "the issue of kneeling has nothing to do with race. It is about respect for our Country, Flag and National Anthem. NFL must respect this!" But his words prove that he's either misunderstood the backlash over his comments, or that perhaps he's just choosing to ignore it. Because as much as Trump might prefer to view kneeling during the anthem as an issue of with-us-or-against-us patriotism, Kaepernick has been clear that kneeling during the anthem was his way of doing what he could to make a high-profile statement against the shooting deaths of black men by police officers who aren't held accountable for their actions, according to The Guardian. He said, “[I’m] not going to stand up to show pride in a flag for a country that oppresses black people and people of color.”

Since Trump made his comments, many NFL players — and in some cases, entire teams — have also opted to kneel during the anthem, stand together with linked arms, or to skip the anthem all together. And in doing so, they've amplified Kaepernick's message about the need to speak out against racial inequality, especially when the president himself is trying to deny that it's even a valid issue. In a statement Sunday, the Seattle Seahawks explained their decision to skip the national anthem before their scheduled game, according to USA Today, and said,

We will not stand for the injustice that has plagued people of color in this country. Out of love for our country and in honor of the sacrifices made on our behalf, we unite to oppose those that would deny our most basic freedoms.

But what about the claim that it's disrespectful to veterans? Well, in the wake of the backlash, many Americans who have fought for their country have also spoken out. And they have argued that, actually, claiming that the players' don't have a right to protest for equal rights during the anthem goes against everything they were fighting for:

The bigger issue though, isn't even whether Trump is right to say that taking a knee during the anthem is unpatriotic. Because when he argues about the flag and the anthem and when he attempts to speak on behalf of all veterans, insinuating that those who lost their lives fighting for their country would agree with him and be outraged, what he's really doing is deflecting attention away from the fact that the people kneeling are also defending Americans who lost their lives. Black men like Tamir Rice, Alton Sterling, Eric Garner, Philando Castile, and Freddie Gray, who were shot and killed by police officers — officers who were ultimately acquitted for their actions, according to The Guardian, if they were even charged in the first place.

That is the aspect of the "take a knee" debate that is getting overshadowed in Trump's divisive rhetoric about the patriotism, yet it's by far the most important detail. It's not just that the players kneeling should be allowed to protest peacefully according to their rights as Americans. It's that the protesting players are doing it because they feel the moral obligation to stand up for the individuals who no longer have an ability to speak for themselves. And they're using the platform they have to try to stop black lives from continuing to be taken as a result of a system that assumes they matter less simply because of their skin color. To ignore their names and faces and stories for a theoretical argument about the flag and patriotism is to ignore the heartbreaking injustice upon which the entire protest is based. And that's exactly what's captured in the below powerful tweet from user Stereo Williams.

If you've been raised to believe that standing for the flag is a non-negotiable sign of patriotism and respect for your country and its veterans, then it's understandable that the act of kneeling during the anthem would seem outrageous — and honestly, the whole point of kneeling in protest is to cause outrage (what good would a protest be otherwise?). But those who have grown up in America knowing all too well what it's like to be discriminated against because of their non-white skin also know that it's a much more complicated issue than that.

It may be in Trump's best interest to oversimplify the issue to rally his supporters, but loving America should also mean loving the values that it stands for — including equality and rights for everyone. So if you think taking a knee is disrespectful, maybe it's time to listen to what the protesters are really trying to say.