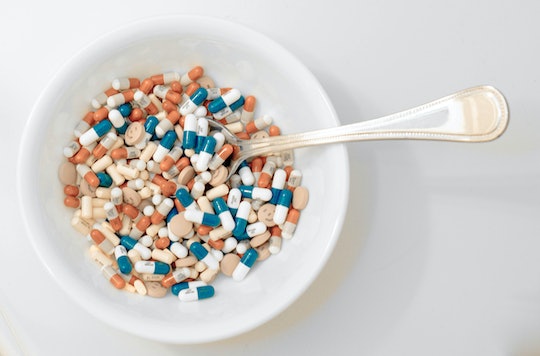 Does Taking Antidepressants During Pregnancy Cause Autism? New Research Suggests Link, But "Suggests" Is The Key Word

New researched published Monday in JAMA Pediatrics has uncovered an unsettling correlation between antidepressant usage during pregnancy and the likelihood of autism. The Canadian study found that in the 145,456 pregnancies that were tracked, babies born to mothers who took serotonin reuptake inhibitors (SSRIs) while pregnant were 87 percent more likely to develop an autism spectrum disorder. Another way of looking at the numbers is that the overall rate of autism was .7 percent for the kids of moms who didn't take SSRIs, and 1.2 percent for the kids of moms who did.

On the surface, this looks frightening for women who take SSRIs and want to become or are currently pregnant. But maternal health experts point to reasons to not be too alarmed about these results. For one, this study can only establish correlation, not causation, between antidepressants and autism because it's an observational study rather than a randomized controlled trial. "I always have to look with a certain degree of skepticism at cohort studies — which I think are invaluable and I have published them myself — but they also have issues,” Dr. Yonkers, the director of the Center for Wellbeing of Women and Mothers at Yale, told The New York Times. Yonkers explained there might be reasons for a link between antidepressant usage and autism that aren't a matter of direct causation.

Still, this finding is significant because it's a high-quality study that adds to previous research finding negative associations between SSRI usage and baby's health outcomes, including a 2015 Finnish study that linked SSRI use to the risk of preterm birth, and a troubling 2013 meta-analysis that found statistically significant links between antidepressant usage and preterm delivery, lower birth weight, and lower Apgar scores. Still, while these associations were statistically significant, they were all small.

Anick Bérard, lead author of the Canadian study, told The New York Times that while moms should take these new numbers into consideration, it certainly doesn't mean they shouldn't treat their depression. "Of course treat depression, but maybe treat it differently, at least during pregnancy," Bérard said. Dr. Yonkers had a similar message, saying that "... People should take a medication during pregnancy if they absolutely need it. If they don’t need it, they should not take it."

More Like This
What Foods Fight Nausea During Pregnancy?
OB-GYNs Explain The Connection Between Stress & Miscarriage
Meghan Trainor Shares Baby News After Dropping Hints On TikTok
Mom Gives Birth To Record-Breaking 16-Pound Baby
What Parents Are Talking About — Delivered Straight To Your Inbox