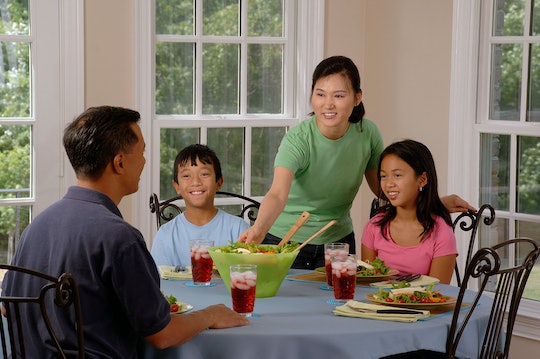 Does Talking About Kids' Weight Affect Them Later In Life? A New Study Says Yes

Every parent wants their child to be healthy, so it's natural that a parent whose child is overweight would want to intervene. But a new study reveals that talking to kids about weight can negatively affect them, even into adulthood. According to the joint study by Cornell University, the University of Texas at Austin, and the University of Vermont, women ages 20-35 who remembered their parents commenting on their weight or eating habits growing up were more likely to be overweight. And what's perhaps even more disturbing is that the women whose parents commented on their weight specifically were more likely to report dissatisfaction with their weight as adults, even if they were actually at a healthy weight.

Drs. Sonia Batra and Travis Stork highlighted on CBS' The Doctors this week that they didn't want to discourage parents from addressing their kids' health; The issue isn't the subject itself, but the framing of the conversation. Parents should focus on health rather than weight, and praise good choices rather than criticize bad ones. Dr. Andrew Ordon agreed, recalling a time when his daughter had put on some weight in college, and he handled it poorly: "I did use words like 'weight,' and I may have said 'fat.' And it was a disaster."

Yikes. He continued: "It hurt my relationship with her, the dynamics at home, the dynamics with my wife, and it took some fixing." Ordon did begin by focusing on health, but specifically mentioning weight was the problem.

While weight is, of course, an indicator of health, it's only one of many, and the end goal is to be healthy, regardless of what the scale says. For perspective, at 6' 5" and 260 pounds, Dwayne "The Rock" Johnson has a Body Mass Index of 30.8, which is considered obese. By contrast, my BMI is within normal range, but I have zero muscle tone, wobbly thighs, and enough butt to pass as half-Kardashian. On paper, I'm healthier than The Rock. That is utter nonsense, and proof that weight is but one small facet of overall health (also, I need to cool it on the potato chips already).

So what should a parent do if their kid is gaining unhealthy weight? Look at the causes, not the end result. Why is he or she gaining weight? Is it from inactivity, unhealthy food choices, stress? Address those issues, while leaving weight out of it. Dr. Dianne Neumark-Sztainer told The New York Times that parents should "make your home a place where it’s easy to make healthy eating and physical activity choices." Don't keep too much junk food in the house. Go for walks and bike rides as a family. If an older child brings up being unhappy with their weight, she said, they should be assured that their parents love isn't conditional on size, and offered support to adjust their "eating patterns and behaviors," not their size. Obesity is unhealthy, but a lifetime of insecurity and shame is certainly no better.