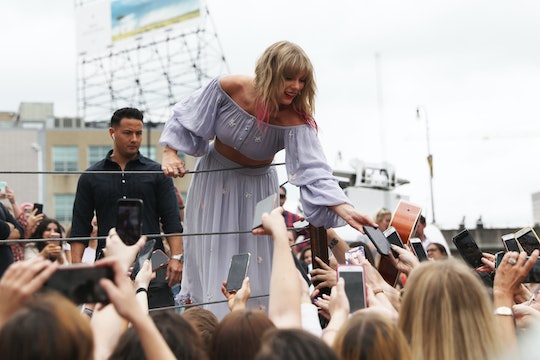 Taylor Swift Speaks French In The "ME!" Music Video & Fans Are Stunned

After a 13-day countdown that had queer fans convinced Taylor Swift was going to come out on Lesbian Day Of Visibility, her big announcement on Apr. 26 turned out to be a new single and music video. Well, at least you dreamed big, kids. The video for "ME!" opens with a vignette in which Swift is arguing with her "boyfriend" (Brendan Urie of Panic! At the Disco) in French. It may have casual T-Swift fans wondering if Taylor Swift really speaks French, but die-hard Swifties will tell you that she's been flexing her modest multilingual skills for years.

In fact, some enterprising superfans have gone to the trouble of uploading YouTube compilations of Swift speaking French over the years, so you can get a sense of her fluency. She openly admits that she speaks "juste un peu," so the vignette that opens "ME!" was probably well-rehearsed. (And, as you might expect, plenty of people on Twitter dunked on her accent anyway.) But in an NBC interview, excerpted below, Swift acknowledged that she tries to pick up a little bit of the native language in whatever country she's touring in. Back in 2013, for example, she performed the spoken word part of "We Are Never Getting Back Together" in French at the NRJ Awards in Cannes, and she's done several interviews with the French radio station in which she shows off a little of her skill. Regardless of what Twitter thinks, her French fans seem to love it and find it very charming.

Following that opening scene, "ME!" serves up a pastel-splashed, feel-good, metaphor-packed buffet of images signaling that Swift is transforming into a new version of herself. For example, the music video takes one image infamously associated with the country-pop star during her Kanye feud days — the snake — and destroys it, exploding the creature into many pastel butterflies.

A few hours before "ME!" dropped, Swift stopped by ABC, where coverage of the NFL Draft was in full swing, and spoke to Robin Roberts about what fans could expect from the song. Said Swift in the interview:

"ME!" is a song about embracing your individuality and celebrating it and really owning it. I think that with a pop song, we have the ability to get a melody stuck in people’s heads and I just want it to be one that makes them feel better about themselves, not worse.

The butterfly/personal metamorphoses imagery woven throughout the video was also heavily teased on Swift's Instagram and in a surprise fan meet-and-greet.

On Insta, Swift revealed that a massive pastel butterfly mural (painted by artist Kelsey Montague) had popped up in Nashville because the singer herself had commissioned it to promote the song. She arrived at the mural site on Apr. 25 to meet fans and post a photo revealing her next surprise announcement clue — that she'd be meeting with Robin Roberts later that night to dish more details. There's no word yet on when Swift's album is scheduled to drop, aside from her assurances on Tumblr that it's coming "SOOOOOOON."