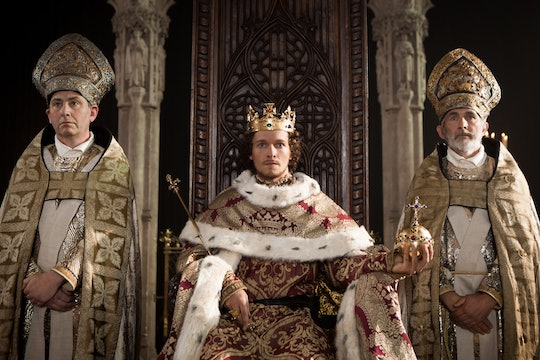 Teddy's Fate On 'The White Princess' May Be Sealed

If The White Princess teaches viewers anything, it's that Tudor England was full of drama — and, unfortunately, full of tragedy. This is especially evident for the children of the kingdom. In the premiere episode, Elizabeth of York's brother, Richard, was taken away and possibly died at the hands of enemy soldiers. Teddy, Elizabeth's cousin, may soon face a similar fate. What makes matters worse is, it could be Elizabeth's husband, Henry VII's, fault. As they are from rival houses, though, it's not exactly surprising. So does Teddy die on The White Princess? Henry was threatened by him from the start.

As it turns out, Teddy was a real figure during the Tudor era. His full name was Edward Plantagenet, 17th Earl of Warwick. He was the son of George, Duke of Clarence who was the brother of Edward IV — so, he was Elizabeth of York's cousin. As a member of the York family, Teddy may not have been thrilled that the rival Tudors took the English throne. This was shown on The White Princess, when Teddy literally told Henry to his face that he himself would be king one day (not a good look, but he was probably too young to know).

It's no surprise, then, that Henry was fearful Teddy's wish would actually come true. When he saw how the people of London loved Teddy, he decided to take action. Henry threw the boy in the Tower of London, which also happened in real life, when Teddy was 10 years old. Historians cite the same reason as Henry on The White Princess: Teddy threatened his throne. On the show, Elizabeth attempts to convince her husband to set Henry free, especially after pleas from her cousin and Teddy's sister, Maggie. Whether this actually happened is unknown.

Will Teddy die? Well, in reality his life was brutally cut short. He spent the rest of his life locked in the tower, and was sentenced to death after being accused of trying to escape. Teddy pleaded guilty of the charge, and was beheaded when he was 24 years old. As of now, though, Teddy is still a child on The White Princess. The show may deviate from history, and have Elizabeth convince Henry to set him free. In this alternative universe, perhaps Teddy will actually serve as a threat. If the series stays true to what actually happened, though, viewers may never see Teddy again.