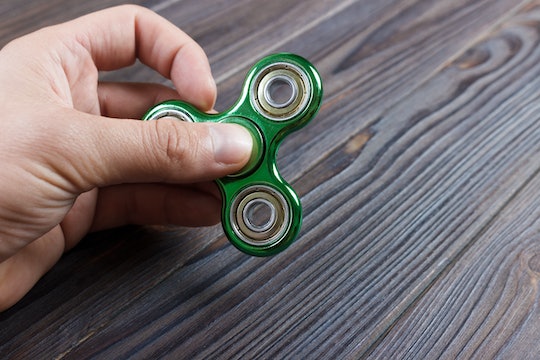 Color is important. Think, when you see a red sign, chances are, you'll see stop. Color can also reflect you mood, but does color affect you cognition? Does color matter in the tools you use to adapt, like a fidget spinner? If you're kid is using one to help a sensory disorder or focus, you may be wondering, does the color of a fidget spinner matter for kids with ADHD?

When I think about color importance, I'm bombarded with memories of the haute design craze that swept over all of the interior decorating magazines in the 90s — feng shui. While feng shui has been around for three millennia, white people really appropriated the heck out of it right about the time everyone in my junior high was choosing which Chinese character they would have incorrectly tattooed on their shoulder. Of course, I needed to paint my teenaged bedroom a deep, crimson color. Because what a hormonal teenager needs is a "fiery" color in their bedroom.

It was not relaxing. It wasn't Yellow Wallpaper bad, but it didn't whisper sweet nothings to put me to sleep, either. (Staying up all night watching Daria did that.) It wasn't until much later in my life that I realized color affected my Attention Deficit Hyperactivity Disorder (ADHD) both positively and negatively. (I eventually found that I needed very neutrally-colored walls.)

Before the past month or so, I never wondered about the color of the tools I use to help control and soothe my ADHD or my son's, but with the wild colors and bright lights of the fidget spinners, which are touted to soothe, are these colors diminishing the positive effects of the device? Does the color of a fidget spinner matter for kids with ADHD? Will the bright green spinner actually make my son's or my ADHD worse?

In the past 10 years, scientists have researched color's effects on the mind with a rigor that they hadn't previously. This area of science is called color cognition, according to The University of Vermont. The reason it's seeing a boom isn't because they want to help people like me pick out paint chips — they want to know what sort of shampoo you'll buy when the right message and colors are combined. While the study is mercenary, the results are more broadly-reaching. For instance, the study published in Science Daily looked at combinations of certain approach and avoid behaviors. They used the model of a toothpaste that fights cavities, something you want to avoid, and a tooothpaste that whitens teeth, something you want to approach, and paired them different colored tubes of toothpaste. They found that the approach method worked best with red tubes of toothpaste, eliciting a faster response time. If you draw a reasonable comparison to something that I need to do to calm myself, like work out, you could note that having red cues around that point me toward exercise, like a set of weights or physio ball, may mean I'm more likely to get it done.

With adaptive devices like the fidget spinner, it's not as straight forward. They're not meant to tarry around a specific set of responses and triggers, instead, according to ADHD-Brain.com, they're meant to assist the person with ADHD to work through or around a trigger, increasing the ability to respond appropriately. The Journal of Architecture and Built Environment recently studied the cognitive concentrative effects of the color and scope of light on undergraduates. They determined that each color correlates to a specific emotion being engendered, and either benefits or detracts from concentration stamina. They also found that light is just as important as color. They determined that a cool blue, neutrally bright (not direct sunlight) is the optimal color for concentration and calm. This explains so much for me — I do all of my work looking out of my south-facing window directly at my clear, blue sky.

But, does the color of a fidget spinner matter for kids with ADHD? If you draw conclusions based on these studies, it would be reasonable to assume that different colors will achieve different results when paired with different motivations, but there aren't studies to point us toward the easiest answer as the toy is just so new. For my part, the LED light show spinners give me a terrible ADHD sensory-related migraine, as do the ones that have multiple colors. Doing my own non-scientific test of the spinners, my son and I both agreed that the simple silver spinner relaxed us the most — however anecdotal that information is. It's going to be trial and error. Watch your child, and ask them questions. How do they feel when they use one versus another? Color, like pizza toppings, are individual.