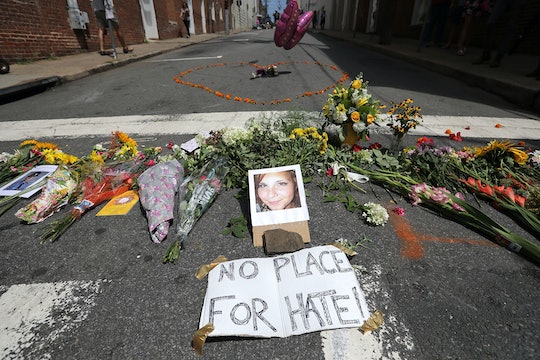 Here's What The First Amendment Means For Nazi Rallies

Freedom of speech is a hallmark of U.S. law, and most generally agree that it's a good thing. But could the law be too broad in some cases? Does the First Amendment protect Nazi rallies, and moreover, should it? It's a tough call that's often left up to courts for interpretation. The First Amendment holds that "Congress shall make no law respecting an establishment of religion, or prohibiting the free exercise thereof; or abridging the freedom of speech, or of the press; or the right of the people peaceably to assemble, and to petition the Government for a redress of grievances."

Certainly, the chaos in Charlottesville last weekend was anything but peaceable, but it could be tough to prove that was intentional. But there are some legal exceptions to freedom of speech, in cases where such speech could be reasonably interpreted as inciting violence. According to Vox, that often hinges on whether such speech is generalized, or directed to an individual. Amid the hateful chants heard in Charlottesville on Friday and Saturday, witnesses claimed to have heard certain racist and homophobic slurs, like the n-word and f-word, being hurled at specific people. Using such words could provoke those individuals to retaliate, and may therefore not be protected speech.

Ahead of a planned "free speech rally" rumored to have white-supremacist ties, Boston Mayor Marty Walsh publicly announced that the group was not welcome, saying, "Freedom of speech isn’t about racist remarks and division." But that's not what the Supreme Court says, according to the Boston Globe. Just two months ago, as part of a ruling on whether a band name inspired by a racial slur could trademarked, Justice Samuel Alito wrote, "Speech that demeans on the basis of race, ethnicity, gender, religion, age, disability, or any other similar ground is hateful; but the proudest boast of our free speech jurisprudence is that we protect the freedom to express the thought that we hate." The Globe also noted that the Supreme Court upheld the right for Nazis to march in Illinois in 1977.

But while the First Amendment does protect hate speech, the Supreme Court has limited that protection when it leads to violence. In a unanimous opinion on 1940's Cantwell v. Connecticut, Justice Owen Roberts held that uttering offensive remarks that provoke violence is criminal, even if the resulting violence was unintended. Two years later, in the case of Chaplinsky v. New Hampshire, Justice Frank Murphy wrote that a "certain well-defined and narrowly limited classes of speech" was not protected under the First Amendment, including "the lewd and obscene, the profane, the libelous, and the insulting or 'fighting' words — those which by their very utterance inflict injury or tend to incite an immediate breach of the peace."

Such rulings are still relevant today; after three protesters were violently attacked at a Kentucky Trump rally in March 2016, they filed suit against the then-presidential candidate, charging that his directive to "get 'em out of here" incited the violence carried out by his supporters. U. S. District Judge David J. Hale granted Trump's request to appeal last week, according to Politico, but cautioned in his decision that "Context matters," and "the mere absence of overtly violent language in Trump’s statement does not appear fatal to Plaintiffs’ incitement claim." The results of the case could have bearing on a case filed by two women who were injured in the vehicular terror attack perpetrated in Charlottesville last weekend. The New York Times reported that in addition to naming the driver as a defendant, the complaint also names 27 additional people who organized and promoted the event.

While some argue that freedom of speech should have no caveats, there's a clear precedent for such exceptions. Germany law also protects freedom of speech, to a point, but bans Nazi propaganda and symbols and Holocaust denial, and it was recently updated in order to prevent Nazi marches and gatherings. Everyone has a right to their opinion, but when expressing that opinion means causing grave harm to innocent people, it's time to draw the line.