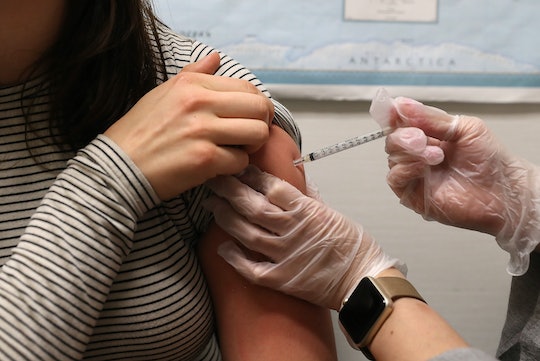 The Flu Shot Doesn't Kick In Right Away, So Don't Delay Any Further

Unless you've been living under a rock for the last few months, you know that this flu season is especially scary, with the majority of states across the country reporting widespread cases causing almost 40 pediatric deaths. With each new story about the epidemic, I need another squirt of hand sanitizer and a few deep breaths, because the only thing worse than catching the flu is worrying if your kids are going to come down with it as well. If you haven't already gotten vaccinated, you're likely wondering if the flu shot works right away, because you need one ASAP if you're going to stay sniffle free this winter.

The truth is, the flu shot doesn't work right away, but it's still a good idea to get one if you haven't. For adults and older children, the flu shot doesn't become effective until about two weeks after you get the immunization. For children, that time period could be up to a month. The Mayo Clinic advised that younger children might need two separate flu shots: "If your child is younger than age 9 years and is getting the flu shot for the first time or has only had one flu shot in total prior to July 1, 2017, plan for two flu shots given at least four weeks apart." The Centers for Disease Control (CDC) explained that the first shot primes a child's immune system and the second provides the needed immunity against getting the flu. However, they cautioned, "Children who only get one dose but need two doses can have reduced or no protection from a single dose of flu vaccine." If your kid needs two doses, make sure you return to your doctor roughly 28 days later for maximum flu protection benefit.

Because the flu shot doesn't work immediately, experts suggest that everyone get the flu shot process started as early in the fall as possible, to capitalize on potential protection from the virus for the majority of the flu season.

It's important to note that the flu shot can't be administered to children younger than six months old. Additionally, if your child isn't feeling well, you should disclose this to your doctor before he has a flu shot, warned The Mayo Clinic. The site went on to explain that if your child has a severe egg allergy, you'll want to bring your child to a doctor's office or clinic (rather than a convenience store pharmacy) for the shot to be administered, because "most types of flu vaccines contain a small amount of egg protein."

However, just because the child flu shot comes in two doses doesn't mean you should cross it off your list because it's a little more inconvenient. The CDC explained that "the single best way to protect your children from the flu is to get them vaccinated each year." And once your child has been vaccinated once for the flu, they should only need one flu shot in the years to come.

In fact, people who are at higher risk for contracting the flu are even more in need of the vaccination for it. These groups, according to Kids Health, include children under the age of 4, breastfeeding or pregnant women, anyone older than 65, caregivers for children or the elderly, and those with compromised immunity, for instance those who have HIV. In fact, the flu vaccine is only not recommended for two groups of people: those who have had a severe reaction to the shot in the past, and those who suffer from Guillain-Barré syndrome, which affects a person's nerves and immune system.

That means everyone else should be getting their flu shot regularly each year — including this year if you haven't already. The flu season lasts until May, so you still have time to protect yourself from the severe sniffles!