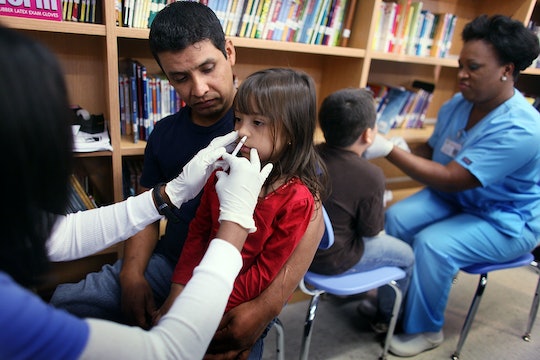 Just Because Winter Is Over, It Doesn't Mean The Flu Is Totally Going Away

Easter is almost here, which means it's springtime and temperatures are starting to finally inch upwards. As warmer days approach, you've got to wonder if the flu survives in warm weather, especially considering the recent flu epidemic in our country. The Centers for Disease Control (CDC) stated that while flu season peaked in February, we may still be seeing flu activity into mid-April, according to Time. But what about later in spring when temperatures start feeling downright balmy — can the flu survive then?

The answer to that is that is, sadly, yes. Scientists did a deep dive into the data and found that while low humidity and low temperatures mean more flu outbreaks, what's considered "a low temperature" isn't actually low at all— approximately 70 degrees, according to NPR. That's why people in the South still get the flu even though they don't experience the same biting winter temperatures as people do in the northern part of the country. In fact, this year the state of Arizona had one of the highest levels of flu activity, while Maine had one of the lowest, according to the CDC.

But there's got to be a reason why we're not typically experiencing flu season in the middle of June. It turns out, there's not just one reason but several as to why the flu tends to run rampant in winter and peter out once spring arrives in all its daffodil-filled glory.

For starters, we spend a lot more time indoors when it's cold out, and that close proximity to one another makes it easier for viruses to spread, according to the BBC. "We’re more likely to take public transport, for instance – and as we’re pressed against spluttering commuters, misting up the windows with their coughs and sneezes, it’s easy to see how this could send us over a tipping point that allows flu to spread through a population."

Additionally, we travel a lot more around the holiday season, which (not coincidentally) is when the flu season this year began to really pick up steam. The CDC stated that "flu activity rose sharply from December through early February," according to their web site.

So for those people who came down with the flu around Christmas, who then stepped foot on airplanes, all of their flu germs went, literally, airborne. When you come to think of it, it's a minor miracle if you return from holiday travel with your health intact.

So, we know that being indoors and traveling can cause the flu to gain momentum, but yet something doesn't fully compute. Why do people in the tropics, who seemingly wouldn't be spending more time indoors due to cold weather, still get the flu?

In fact, to make everything infinitely more confusing, "In places like the Philippines and Vietnam with intense monsoon rains (averaging more than six inches a month), flu season peaks when it's hot and rainy," according to NPR.

If you're thinking that seems to fly in the face of the whole "low humidity, low temperatures" thing being tied to the flu, then you're right. One explanation for this, according to the BBC, is that "in particularly warm and wet conditions of a tropical climate, the virus may end up sticking to more surfaces within a room. So although it can’t survive in the air so well, the flu virus could instead be thriving on everything that you touch, making it more likely to pass from hand to mouth."

Okay, yes, the germophobe in me is feeling slightly panicked about all of this, but the good news is that the flu shot for next year is already being developed by the Food and Drug Administration (FDA), according to Popular Science. Let's hope that next year's vaccine is way more effective than this year's.