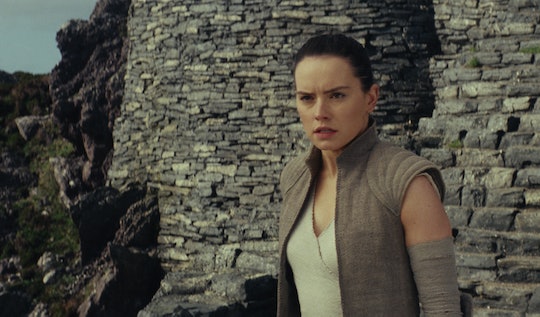 We Finally Know Who Rey's Parents Are In 'Star Wars'... Or Do We?

Over the course of time (OK, the last 40 years) the Star Wars franchise has left fans truly shocked by many plot reveals. Some of the largest plot twists in the original trilogy revolved around parentage and who is the father of who, and so on, you know the twist (right?). Well, similar stories are being told in the newest Star Wars film, The Last Jedi, as the mystery of who Rey's parents are continues to nag at fans committed to understanding all of the intergalactic connections between characters.

Warning: This post contains spoilers from Star Wars: The Last Jedi. Continue at the risk of learning plot points from the latest film.

Rey's journey in The Last Jedi had a lot and a little to do with her parentage. For one, she spent most of the time on a planet with Luke Skywalker attempting to persuade him to not let the Jedi die (thus the name of the film). (Spoiler alert for that storyline: it went pretty well, one could presume.)

Another huge storyline for Rey, though, was her connection with her rival Kylo Ren. Kylo went through a Journey (with a capital "J") in the film, battling between the light and the dark. For moments, audience members may have believed that Rey's pull and connection to Kylo would be enough for him to ultimately be good. But, the idea of leading the First Order with the Supreme Leader dead was enough to keep him on the dark side.

In one of the biggest climaxes of the film (there are multiple), Kylo and Rey battle Snoke and his army, defeating them in an epic moment that screams "Come to the light side, Kylo!" It's then when Kylo asks Rey if he'd be his queen and rule the galaxy with her by his side. Rey, being a literal ray of light, says no, she can't possibly do that, and that pretty much closes the book on Rey's thought process that she could change Kylo to be good.

That's when the huge revelation comes out, per Kylo Ren, that Rey's parents are "nobody." She's always known it, Kylo says, but for whatever reason, he seems to be positive that they were "junk traders" who sold her for drinking money. Brutal stuff for Rey, but it also reveals an almost bigger question for fans: is Kylo Ren lying?

The internet has been theorizing about who Rey's parents are for — honestly, probably as long as the internet has been around. As CinemaBlend says, one of the strongest and probably the most obvious theories, is that Rey is Luke Skywalker's daughter. It makes sense, considering how The Last Jedi plays out for the first two hours. Rey spends so much time with Luke, learns from him, has some fun banter with her could-be-dad... he very well could have been her father.

But according to Kylo, he's not. "Nobody" is.

There's also the theory that she's related to Obi-Wan Kenobi — as CinemaBlend also points, there is almost a poetic nature to Luke training his mentor's granddaughter. But, again, much like the Luke theory, there isn't a lot of evidence that points to these actually fleshing out in the series. When would this have happened? Would audience members feel robbed of not seeing the origin, thus making it feel like a plot device to just somehow get her to be this inherited great?

It's a lot more fun to think Rey is so great because she's just a badass who comes from "nobody" parents that weren't all that great. The growth she's seen in becoming one of the coolest characters of the franchise is all because of her. Not because of her father or her grandfather.