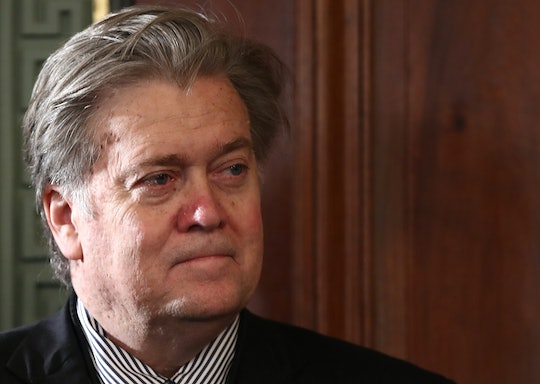 Does The National Security Advisor Run The NSA?

President Donald Trump's move to grant one of his top political strategists, former Breitbart executive chairman Steve Bannon, a seat on the National Security Council has more than a few people worried about what his new role will mean for the country. Does Bannon's new council position mean he'll have influence over the National Security Agency, or does the national security advisor run the NSA?

That influence might be even larger now, considering that Trump's National Security Council reform also saw the director of national intelligence and the chairman of the joint chiefs of staff removed from regular NSC meetings, according to Fortune. That shrinks the circle of advisors holding the president's ear, increasing the influence of those remaining (spoiler alert: that includes Bannon and Flynn).

The decision has drawn plenty of criticism from former intelligence officials, who have broadly denounced the politicization of what was, in the past, a meeting based solely on military and intelligence information. James Steinberg, who worked as deputy national security adviser for President Clinton, told The Guardian.

What is striking about it is it is such an explicit rejection of the well-entrenched principle that when it comes to matters of national security that politics doesn’t have any place in the room. It is a flat rejection of what has been a shared view of Republican and Democratic administrations.

While the national security advisor and the NSC don't run the NSA, their influence could have wide-ranging repercussions. As Kori Schake, a defense analyst at the Hoover Institution, told The Guardian:

A president would not, for example, want to find out after issuing an executive order banning immigration from countries fighting alongside us that those countries would reciprocally ban Americans, to great detriment for the war effort.

According to Fortune, a Trump administration official said the restructuring of the National Security Council wouldn't actually keep officials (such as the director of national intelligence and the chairman of the joint chiefs of staff) from meetings — it was simply meant to free them up from attending unnecessary meetings that didn't relate to their departments.

Either way, Trump's decision has brought forth its fair share of criticism in Washington, and his National Security Council rearrangement is likely to have its own repercussions. And while individual agencies might not be directly affected by the change, decisions made about the United States' national security plans will definitely be affected by the shake-up.