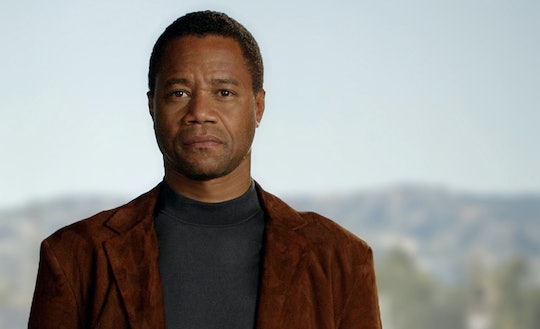 Twenty years later, and people are still wondering: Did O.J. Simpson kill Nicole Brown Simpson and Ronald Goldman? Even if there was reasonable doubt regarding the answer during the football player's 1995 trial, there's little doubt that it's a question many will continue to ask, especially following the premiere of FX's The People v. O.J. Simpson: American Crime Story. But does the series guide its audience in a certain direction? Does The People v. O.J. Simpson claim Simpson did it?

Watching the premiere, it's tough to say. On the one hand, there is evidence seen on screen that seems to undeniably point to Simpson's guilt. (The blood on his car, Simpson's history of domestic abuse, Simpson's flip-flopping story about the night's events... the list goes on.) But when Cuba Gooding, Jr.'s Simpson is asked about whether or not he killed his ex-wife? The actor, as the former football player, delivers a definitive, "No." (Simpson's current legal team has not responded to Romper's request for comment about doubts over his not guilty verdict.)

But does the series believe its star? Well, it doesn't matter. Based on interviews with those behind-the-scenes at American Crime Story, it seems viewers shouldn't expect a definitive answer or claim from the FX show. What's more interesting than the truth, according to the show's producers, is how the jury got to their version of the truth.

It's an unexpected approach, especially considering the series' source material. The People v. O.J. Simpson is based on Jeffrey Toobin's 2013 book of the same name, The Run Of His Life: The People v. O.J. Simpson. And, in that book, Toobin claimed he felt Simpson did commit the crime. (On page three, in fact.) But don't expect that attitude to bleed into the FX series. As Toobin himself told Slate:

Ryan didn’t want the story to be as if he’d done it. He wanted the story to be about the prospect and the people and the legal world in which the case was tried. I wouldn’t say the series abounds with alternative suspects, but it is definitely different from my book, [which states] explicitly that they did it and you know this.

And it seems Murphy was strict on ensuring that the answer to the oft-asked question did indeed stay out of the project. Gooding Jr., speaking with The Daily Beast, said it was "my job to divorce myself from that" — "that" being the question of Simpson's involvement in the crime. According to The Daily Beast, via Gooding Jr., the actor was instructed to channel both a guilty and innocent Simpson, depending on the scene the actor was shooting.

He says to you, 'On this take, I want you to play it this way.' That way might be showing O.J.’s guilt, or it might be portraying the frustration of his innocence. I have to be true to what he’s asking me to do. So I can’t let myself be too convinced in one frame of mind or one way of thinking.

So, The People v. O.J. Simpson's audience won't get a definitive answer. But what they will get? A fascinating account of just how insane the The Trial Of The Century was. As Gooding said:

No reasonable doubt about that.