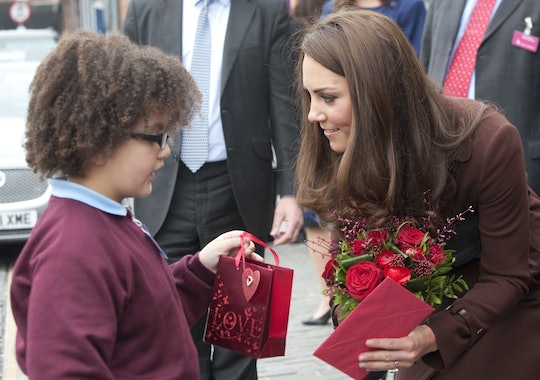 Does The Royal Family Celebrate Valentine’s Day? Not In The Way You Would Expect

Valentine's Day is just around the corner, and while most minds are on roses, candies, and even diamonds, there are others who are taking a more selfless approach to the holiday. Somewhere across the pond the royals are planning something a little different. The Duke and Duchess of Cambridge along with the expecting Duke and Duchess of Sussex, and other royals will likely turn their attention to matters that are closest to their hearts to celebrate. So, does the royal family celebrate Valentine's Day? Not in the way you would expect.

For the royals, the day dedicated to love is all about giving back to the community. Talk about tugging at the heart strings.

Kensington Palace has not announced Prince William and Kate Middleton's Valentine's Day plans yet, according to Town and Country, but if they're anything like years past, they will be spending the day in service to others.

So what did some of their past Valentine's Days look like?

During her first year as a newlywed and member of the royal family, Middleton spent her 2012 Valentine's Day visiting patients at the Alder Hey Children's Hospital, according to PopSugar Australia. Prince William, however, was away in Argentina for military training. As they say, absence makes the heart grow fonder.

In 2014, Middleton spent her Valentine's Day morning visiting the students of Northolt High School and assisting them with their projects, according to E! News. In turn, they presented her with a beautiful bouquet of flowers.

Meanwhile, Prince William and brother Harry spent the afternoon filling and handing out sand bags to those recently affected by floods, according to E! News. Although, from reports, it looks like the princes would have rather had the help from assembled paparazzi than seeing them watch them do all the dirty work, according to ELLE.

As for the expecting newlyweds, Prince Harry and Meghan Markle, duty calls this year. They won't be dining out together at some romantic restaurant this year, that's for sure. Prince Harry will spend the day with the Royal Marines in Norway to witness the 50th anniversary of the Exercise Clockwork — an event that has trained Royal Marines and Navy Sailors since 1969 to survive and fight in the harshest of winter climates, according to People.

Markle, on the other hand, will remain in the UK, and while her schedule, too, is currently clear, per Town & Country, it wouldn't be shocking if she spent the day making her usual rounds as the new Duchess of Sussex as she continues on to her third trimester of pregnancy.

And while they might be apart for the holiday of love, it's possible that Markle will plan something special for the two of them upon his return. She once said on her now-defunct website, The Tig, that she's "a sucker for Valentines's Day," according to People.

As for the elder royals, not much is known about how Queen Elizabeth and Prince Philip or Prince Charles and Camilla Parker Bowles, the Duchess of Cornwall, will spend the day. But if they're anything like their children and grandchildren, chances are they too will spend the day working with — or for — others.

All in all, the royals are a great example of how we can contribute to those around us on this day of love, instead of self-indulging. Of course, there's nothing wrong with polishing off a box of chocolates or cozying up to your love while watching a movie, but it's nice to know there are other alternatives that leave more of an impact.