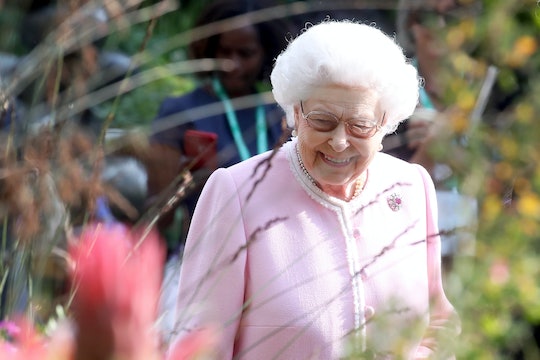 Does The Royal Family Earn A Salary? Here's Where They Get Their Money

The British royal family is generating a lot of headlines across the pond lately — a new prince here, a new duchess there — and they've really started to pique Americans' curiosity. But it's hard enough to wrap our heads around how our own government works, let alone learn the customs and rules of another country. So what's their deal? Does the royal family earn a salary? Do they have any real power? And what is it that they do, exactly, besides look glamorous while boarding private planes wearing hats? Hopefully, this is something that Meghan Markle looked into before giving up her career, and her citizenship to *maybe* rule over the county of Sussex.

According to the royal family's official website, the monarchy has three sources of income: Queen Elizabeth's personal wealth, the Sovereign Grant, and the Privy Purse. The Crown Estate — that is, the monarchy's land — is technically the property of the British government. The government then pays the Queen 15 percent of the profits generated, and this is what makes up the Sovereign Grant. The money is intended for the upkeep of the palaces, and is also paid in exchange for the Queen executing her royal duties.

The Privy Purse is a "portfolio of land, property and assets held in trust for the Sovereign in his/her role as Sovereign," the royal website states. It's "used mainly to pay for official expenditure not met by the Sovereign Grant (primarily to meet expenses incurred by other members of the Royal Family)." So that's what the newly minted Prince Louis and the Duchess of Sussex will be living off of.

It might not seem like a few parcels of land would generate enough money to keep all those royals in tiaras, but according to Business Insider, the Crown Estate generated a profit of £267.1 million in 2013, which is equal to about $325.8 million. The Queen's payments are based on the financial year two years prior, so that means that in 2015, she collected a whopping £40.1 million (or $48.9 million) from the Crown Estate alone. The Duchy of Lancaster, the official title of the portfolio that funds the Privy Purse, delivered a net income of £19.2 million for the fiscal year ending in March 2017, or about $25.6 million, which is a nice little chunk of change to dole out to the kids and grandkids every year.

Finally, there's the matter of the Queen's personal wealth and income, which the government doesn't meddle in. While she technically has no claim to Windsor Castle or the Crown Jewels, for example, she does own both Sandringham Estate and Balmoral Castle in Scotland, which she inherited from her father, King George VI. In addition, she has a personal investment portfolio, as well as "a valuable stamp collection and numerous works of art," according to CNN. In total, her assets are estimated to be valued at £340 million, or $490 million, meaning she's doing quite well for herself even without those government handouts.

Prince Charles, while collecting some of the monies from the above-mentioned grants, also receives his own payments for his royal duty. We might know him primarily as the Prince of Wales, but he's also the Duke of Cornwall, which makes him entitled to the proceeds of the Duchy of Cornwall, another land portfolio similar to the Duchy of Lancaster. Similarly, the Prince isn't permitted to sell the land, but he is entitled to the profits it generates, the royal website explains. He uses this money to provide for his wife and sons, cover his charitable work, and even though it's not taxable, he voluntarily pays income tax at the highest rate possible, which is pretty impressive. If only we had a similar setup over here.