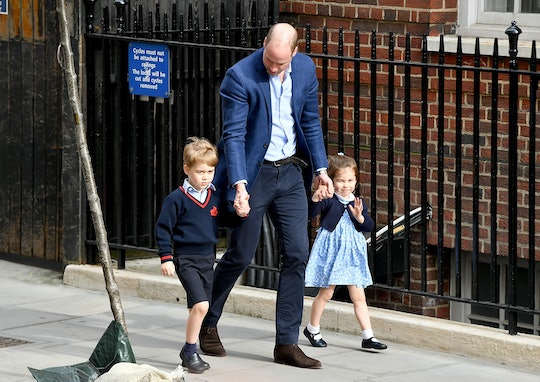 Evidence Seems To Say That The Royal Family Supports Vaccination

Prince Louis of Cambridge is one month old now, which means he's about halfway towards recognizing his parents faces and voices, and gracing the world with his first smile. But what about the other milestones of an infant's first weeks? Many non-royal parents remember the anguished moment when they took their baby to get their first shots, but does the royal family vaccinate? It's becoming increasingly (and disturbingly) common for parents in the United States to delay or even forgo lifesaving childhood immunizations, but has that dangerous trend crossed the Atlantic and made its way into Kensington Palace?

The National Health Service (the United Kingdom's public health agency) has a similar vaccine schedule to that of its U.S. counterpart, the Centers for Disease Control and Prevention. Just like us, British parents are advised to vaccinate their kids for pneumococcal infections, rotavirus, diphtheria, tetanus, pertussis, hepatitis B, polio, and haemophilus influenzae type b at 8 weeks of age. One of the few differences between the two agencies' schedules is that the NHS also recommends vaccinating against meningococcal type B at 8 weeks, while the CDC advises that only high-risk patients need to get it that early; otherwise, the typical first dose isn't given until age 11 or 12 years.

Prince William and Kate Middleton haven't spoken publicly about their children's healthcare, and Kensington Palance did not immediately respond to Romper's request for comment, but it's probably safe to assume that they did vaccinate Prince George and Princess Charlotte, and intend to vaccinate Louis, as well. After all, they're both well-educated; they met while attending the University of St. Andrews. And childhood vaccination rates are seeing some slight declines in the U.K., according to the NHS, but the national rate is still well over 90 percent, which is better than we can boast over here.

It's true that the royal children lead more insulated lives than their U.S. peers — no way will the paparazzi ever catch Charlotte licking a shopping cart handle at Trader Joe's — but remember, the two oldest kids attend nursery school, which any parent can tell you is an absolute petri dish of everything from colds and stomach viruses to pinkeye and hand, foot, and mouth disease. Just because they're wealthy and famous doesn't make them immune.

Kensington Palace isn't publishing the kids' health records on Twitter anytime soon, but there are a few hints as to how the family feels about vaccines, and they look pretty promising. First of all, the kids' great-grandmother was actually one of the first public advocates for vaccines. According to the Daily Mail, when the polio vaccine was first introduced in Britain in 1956, the public was extremely wary, due to some earlier mishaps. To quell citizens' fears, Queen Elizabeth herself made it known that both Prince Charles and Princess Anne, ages 8 and 6 at the time, had been among the first U.K. children to receive the vaccine.

As for the Duke and Duchess of Cambridge themselves, their long history with children's charities has brought them into the same circles as childhood vaccine advocacy on numerous occasions. In October 2011, Kensington Palace announced that the couple planned to visit UNICEF's emergency supply center in Copenhagen, Denmark, to observe the distribution of supply kits to malnourished children in East Africa, which included vaccines. And in honor of the birth of Charlotte in 2015, Canadian Prime Minister Stephen Harper announced that the government would give $100,000 to a vaccination advocacy group, the CBC reported. Harper noted that the gift was in recognition of the family's well-documented interest in children's health. It's most likely that the Duke and Duchess' interest extends to their own kids, and they'll be properly immunized, just as all children should.