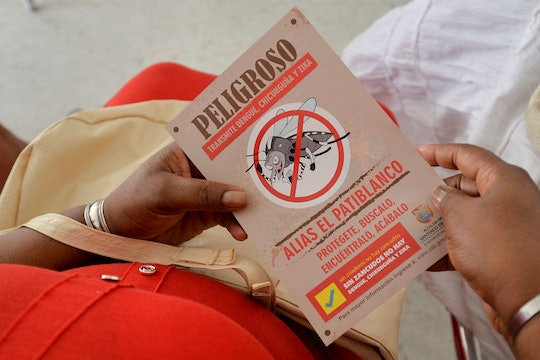 Does The Zika Mosquito's Bite Itch More? The Virus Can Have Scary Consequences

The Zika virus has been linked to microcephaly, Guillan-Barré Syndrome, and a host of other neurological conditions in those who contract the virus, making it an understandably scary prospect. Although people have been applying more mosquito repellent and keeping indoors to ward off mosquito bites, it can be reassuring to sort out the facts from the media hype. If you've been scratching away at a mosquito bite and worrying about potentially contracting the virus, you might be wondering: does the Zika mosquito's bite itch more than a regular mosquito's?

Unfortunately, there is no way to tell if you have Zika by how much your mosquito bite itches. Mosquito bites itch because our bodies are reacting with histamines to a foreign substance: namely, mosquitoes' anticoagulant saliva (which female mosquitoes use to keep blood flowing while they feast on us). Since this is how all mosquitoes "attack," there's no way to use that itch to determine whether you may have contracted Zika. Reactions do vary depending on each person's reactivity to mosquito bites, and some people may have stronger reactions to different mosquito strains' saliva, but that varies by individual reactions, not by mosquito.

(On that note, stop scratching. When you scratch a mosquito bite, you release more histamines, which will just make the itch worse.)

The mosquitoes responsible for transmitting Zika are also fairly widespread, so chances are you've been bitten by the Aedes aegypti or the Aedes albopictus before. Research in March showed that another strain, the Culex quinquefasciatus, might be able to transmit Zika, too, so your best bet isn't to worry about specific strains of mosquitoes. Rather, you'll want to take the necessary precautions against mosquito bites by using repellent, mosquito nets, or using air conditioning, especially if you're pregnant or expecting to become pregnant. If you're not pregnant, the risks are less severe: For most people who contract Zika, they won't even realize they have it, since they won't develop any symptoms.

If you are worried about getting Zika, though, make sure to protect yourself against all mosquito bites, since you won't be able to tell by a mosquito's bite whether it was a nefarious Zika-carrying bug or just one of the regular, annoying ones who likes to ruin your hikes. If you're planning a trip, you'll also want to make sure to keep away from places with known Zika outbreaks.

For now, spraying on repellent and taking precautions against mosquito bites is probably everyone's best option to prevent the spread.