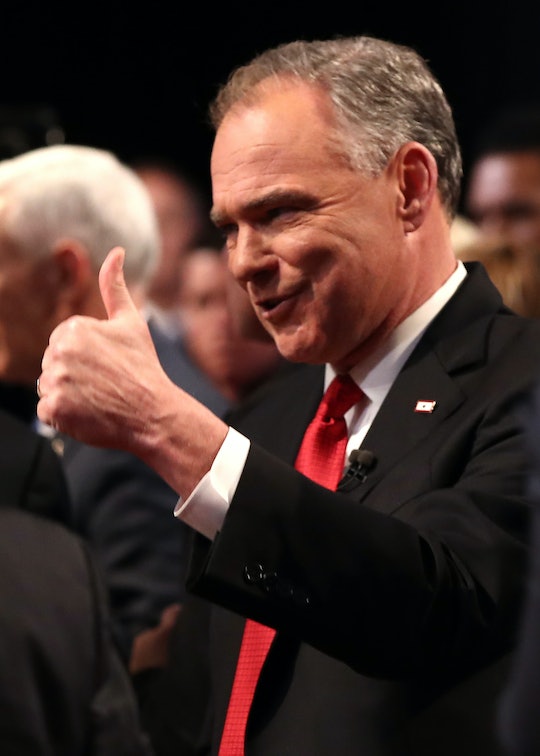 Does Tim Kaine Look Like The Joker From 'Batman'? These Memes Are Amazing

The internet has a knack for pointing out people's look-a-likes, or saying that celebrities are "twinning." So it's no surprise that after the vice presidential debate Tuesday night, the internet took a good look at the candidates and decided that at least one of them resembles a certain comic book villain. Apparently, the internet thinks that Tim Kaine looks like The Joker from Batman.

More Like This
Make All The Instagram Memes You Want, But Motherhood Will Not Be Optimized
14 Great TV Episodes To Watch With Dad On Father’s Day
20 Great Movies About Fathers & Sons That Will Make You Laugh & Cry
25 Great Kids’ Shows To Stream On Paramount+

The first order of business is: which Joker does the internet think Kaine looks like? Because the Batman franchise is vast — the original comics, many movies and television shows. There have been a lot of depictions of the Joker over the years. So which one does Kaine supposedly resemble?

According to the internet, the Kaine/Joker meme seems to always include an imagine of Jack Nicholson's Joker from the 1989 movie Batman (which was directed by Tim Burton). This Joker is definitely one of the most well-known ones, and Nicholson — who was already known for his bone-chilling performance in The Shining — gave his Joker a razor-sharp, creepy edge. And up until Heath Ledger's Oscar-winning performance as The Joker in The Dark Knight (2008), Nicholson's version was generally regarded as being the most iconic.

Variety ranked Nicholson's performance as The Joker third on their list of Joker performances — the late Heath Ledger's was first.

This meme actually started back in July when someone uploaded an image to MemeGenerator of Jack Nicholson's Joker with the caption "I like Tim Kaine. He's a handsome guy." Of course, now that the vice presidential candidates are getting more media attention in the wake of the debate, the meme has resurfaced on social media.

There were a few posts that showed Jokers other than Nicholson's, and I'm no expert but it seems like the comparison has something to do with Kaine's eyebrows and mouth — defining features of most renderings of The Joker.

The character of The Joker appeared in the very first Batman comic, which debuted in 1940 and was published by DC Comics. He's basically been Batman's archenemy for more than 75 years (now that's a celebrity feud). The Joker's character is a violent sociopath who taunts Batman and kills people for his own amusement. His appearance was modeled after the depiction of a joker often seen in traditional playing card decks, but with some gruesome twists. Over the years, the tone of the comics softened a bit and the character of The Joker became more annoying and clownish — but in the last 20 years of film adaptions, the villain's original violent edge returned.

Kaine's not the only one to get the "he kinda looks like. . ." treatment, though: Trump's running mate Mike Pence got plenty of Twitter's sass, too:

No word on whether Kaine will perform card tricks or send a cryptic message to Gotham's superhero when he shows up to support running mate Hillary Clinton in the next presidential debate on Oct. 9.