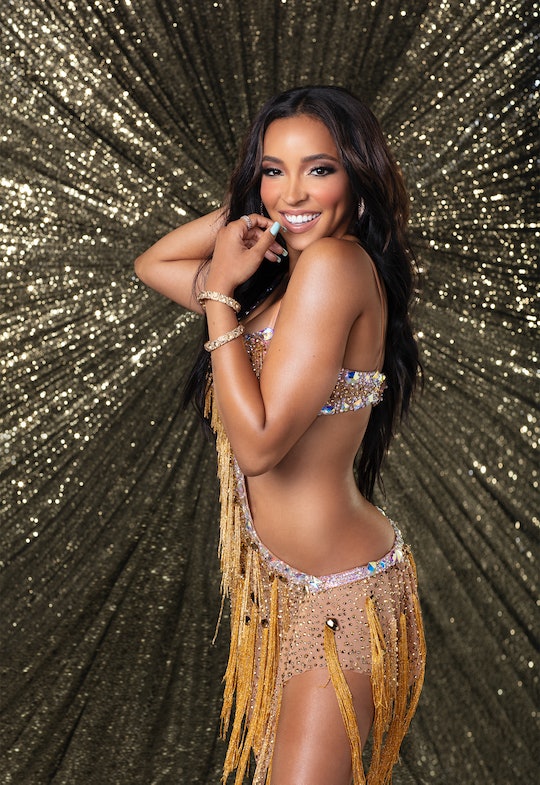 Tinashe's Resume Is Impressive — But Is It Enough?

Most of this season's Dancing With The Stars contestants aren't known for their stellar dance moves. The appeal of the reality dancing competition is in watching celebrities pair with a dancer who actually knows what the hell they're doing. We watch them grow in roles we'd normally never see them in and it's spectacular. But some of the show's contestants don't exactly have two left feet. You might even say they're phenomenal dancers, like R&B singer-singwriter, Tinashe. This begs the question, does Tinashe have dance experience? To put it simply: yes and no.

Tanashe Jorgensen Kachingwe, the sensation known for crashing dance classes, could have an unfair advantage, depending on how you look at it. At just 25, the singer, actress, and model has had her hand in some major campaigns. Whether it's her MAC limited-edition eye shadow palette, or the 2017 partnership with Urban Outfitters and Juicy Couture as a model for their revival line, Tanashe's resume is nothing short of impressive. Why not add the mirror ball to her list? Aside from all that awesomeness, turn on any Tinashe video and you can clearly see the girl can dance. As far back as 2012, she spoke to the matter via Twitter.

It's not a bad thing to know what you're doing on national television, but for fans of DWTS underdogs, is previous dance experience a dealbreaker? Tanashe told E! Online having some formal training, like learning basic steps, has its advantages, for sure. "But in this particular case," she added, "ballroom, it's so specific and so different than what I'm used to it's almost a hinder."

The majority of past contestants, however celebrated in their own profession, have come onto the show with zero dance experience. Again, that's what we love about the premise. But more than a few have a leg-up. Season 26 winner and Olympic figure skater, Adam Rippon is just one example. The physicality of his sport, some think, gave him the advantage. And that's the same argument with Tanashe. Though her partner, Brandon Armstrong, is a newbie addition to the pro cast which may even the playing field a bit. ABC News said Armstrong, a DWTS troupe dancer since Season 24, started his pro-training at 12, marking his first DWTS appearance at just 13-years-old. I couldn't do a cartwheel at 13 but it's cool.

On the other side of things, knowing how to dance isn't an indicator of who'll take home the trophy. The same season Armstrong became a troupe dancer was when Glee actress and professional backup dancer for Britney Spears and Beyoncé, Heather Morris, was voted off. It also didn't matter that she'd also been a contestant on Season 2 of So You Think You Can Dance. So really, what is experience?

At the end of the day, celebs with past dance experience have to learn new moves like everyone else. Not many of the cast members (this season or any other) are known for their ballroom skills. In fact, Tinashe went on to tell E! Online "I'm used to dancing really down in my body, really more hip-hop oriented. This is really more forward and on your toes," she said. "It's just different."

When it comes down to it, yes — Tinashe has previous dance experience; loads of it. She probably dances in the shower, while brushing her teeth, and in her sleep. She may have a slight advantage going into Season 27 having the basics down, but it's not a given. That's the beauty of this show. You can be an Olympian like Adam Rippon, an NFL player like Rashad Jennings, a conservationist like Bindi Irwin, or a U.S. Army Veteren like J.R. Martinez — none of whom are professional dancers — and still go home with the mirror ball. Experience is optional but dedication to learning the dances while wearing all the sparkles? Totally necessary and as virtual spectators, we're so, so grateful.