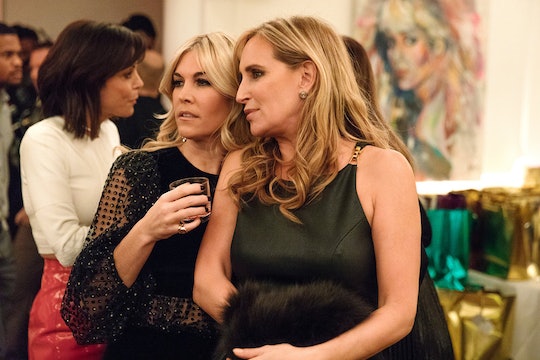 Season 9 of Real Housewives of New York brought a new face in the form of Tinsley Mortimer. While she may have been familiar to people who are really into the New York social scene, many fans were learning about her for the first time on the show. Her divorce, breakup, and arrest suddenly became public knowledge, as did the fact that after moving from Florida back to New York, she was taken in by fellow 'Wife Sonja Morgan, but does Tinsley still live with Sonja on Real Housewives of New York?

Per the New York Post, Tinsley moved out of Sonja's townhouse back in March and is back on her own (or as "on her own" as she can be living out of a hotel in midtown) while she apartment hunts. As for where she's moving? She's looking for the right area that fits her current lifestyle. "I’m still an uptown girl," Tinsley said. "I just don’t know if the uptown girl wants to live downtown."

While she is far from the first co-star Sonja has taken in (never forget when Luann was her roomie), Tinsley said that Sonja's offer came at the best possible time. "I was living in Palm Beach and had a bad relationship and she reached out to me and said to get out of Palm Beach," she recalled. "'You don't need to be there. Come back to New York; it's your home. It's where your friends are.'"

Because this is Sonja we're talking about, it shouldn't be at all surprising to learn she had some ground rules for Tinsley while they were living together. "I’m not supposed to take the elevator," Tinsley said. "Sonja says it gets a little tricky sometimes, and I guess it’s expensive [to operate]." She was also "not allowed" to speak to Sonja's assistant, Connor, nor could she ask him to do anything for her. Oh, and she wasn't allowed to have men over. Does living with Sonja sound a lot like being a teenager living with a really strict parent? Sure, but at least no one gets hurt!

Before living together, Tinsley and Sonja were friends for years, "having run in similar circles on the NYC charity scene." Friends for 15 years, Tinsley has always viewed Sonja as "someone that I looked up to and was a great friend."

I'm sure we'll be hearing more details about Sonja and Tinsley: The Roommate Era during at least one of the reunion shows.