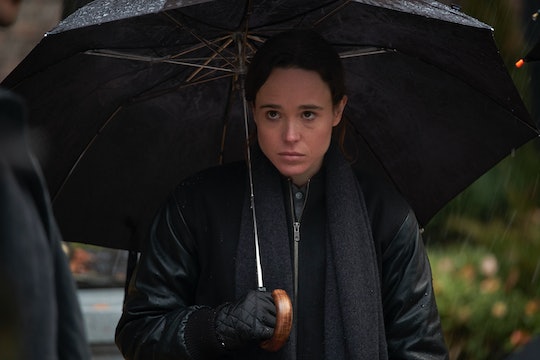 Here's What Vanya's Power Really Is In 'The Umbrella Academy'

Netflix's highly anticipated adaptation of the comic book series The Umbrella Academy, written by My Chemical Romance frontman Gerard Way and illustrated by Gabriel Bá, is finally here, starring none other than Ellen Page. She plays Number Seven AKA Vanya, the mysteriously powerless one at a school of supernaturally gifted siblings. But does Vanya really not have any powers? All is not as it seems, and, of course, Page is the perfect actor to take on the complicated role.

According to the Netflix synopsis of The Umbrella Academy, the story opens in 1989, when 43 babies were spontaneously born to mothers who had no idea they were pregnant. A billionaire industrialist named Sir Reginald Hargreeves adopts seven of them and begins harnessing each of their special powers in a training program called The Umbrella Academy. He numbers them in order of whose powers are the most important to him, and, at number seven out of seven, Vanya obviously grows up in a pretty terrible home environment.

"Ultimately, she's a person who had this really abusive childhood, you know?" Page told the Independent in an interview ahead of the premiere. "Her father was horrible to her, the children were horrible to her, and now she's existing in her early 30s and really can barely cope."

"She is depressed, she is anxious, she barely even knows how to have a friendship, let alone an intimate relationship, and she’s struggling with these feelings of complete and utter worthlessness," Page continued. "That whole arc in general was like, 'yes please.' I immediately related to Vanya."

The only thing Page's character does appear to have going for her is that she's an exceptionally talented violin player — which, of course, is also the source of her power.

In the comics, readers come to learn that Sir Hargreeves was suppressing Vanya's powers all along, because, as it turns out, she's actually the most powerful of his children: she's capable of destroying the entire world by playing a single note on her violin. Except packing all that childhood trauma and repressed rage turns her into a supervillain instead of a superhero. She calls herself The White Violin and wreaks havoc.

"She's going from this place of repression, to finding out who she is, to getting in touch with the rage she has, that leads into this…power," Page told the Independent.

Although The Umbrella Academy ultimately disbanded when the siblings' relationships unraveled in their teen years, the series opens on them in their 30s, forced to reunite due to their father's death, and the impending apocalypse. Number Five, a teleporter who had mysteriously vanished during childhood, returns from the future to warn his siblings that they have about eight days to stave off the end of the world. So is The White Violin part of the world's undoing or does Vanya's better nature come through to save the world? The Umbrella Academy is now streaming on Netflix, so you won't have to wait long to find out.