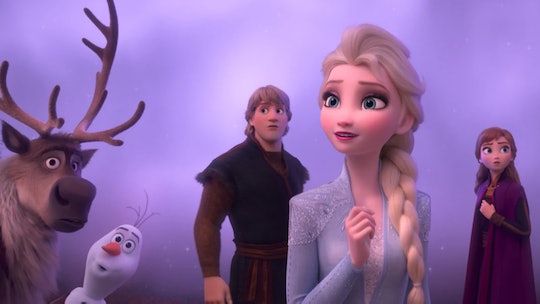 NOTE: Spoilers from Frozen 2 are ahead.

Do water horses really exist? What's the deal with Anna and Kristoff now? Plenty of parents, like myself, have probably been fielding those questions and more after seeing Frozen 2 in theaters. The long-awaited sequel was packed with new characters and loaded with information, such as the novel concept that Elsa's powers allow her to see "memories" in water. And, like myself, that likely led you to asking yourself, "Wait... does water have memory?"

The concept of water having memory is first introduced by the movie's lovable and naive snowman, Olaf. On their way "into the unknown," the talkative sidekick helps pass the time by sharing trivia with his travel companions. And one of his random informative nuggets is that water apparently has memory. In Frozen 2, Olaf recites a fact about the water that we drink having passed through at least four different humans/animals, and that through it all, the water somehow retains memory. Little did viewers know, this concept becomes key to the Frozen 2 plot.

Once Elsa, Anna, Kristoff, Olaf, and Sven make it to the enchanted forest and meet the Northuldra people and Arendelle soldiers, who've been trapped in the forest by impenetrable mist for 35 years, Elsa uncovers a number of truths about the past. And these truths are revealed in the form of water memory, aka those ice statues formed from Elsa using her power on memory-holding water.

For example, memories hidden in water show that it was her and Anna's mother, Iduna, who saved their father, King Agnarr, all those years ago. Water memory also confirms Iduna and Agnarr did indeed perish when their ship capsized. The biggest water memory in the film is that Elsa and Anna's grandfather was not a very kind ruler, which was revealed — through a water memory — that he tricked the Northuldra people by "gifting" them a dam that actually weakened their powers. He then killed the Northuldra leader when his back was turned and he was unarmed.

As helpful as "water memory" is in the plot of Frozen 2, and as fascinating as it sounds, it's not a real thing. Sorry to burst your bubble. The concept came from French scientist Jacques Benveniste in 1988, and it is still used to attempt to justify homeopathy today. The idea is that water molecules somehow retain "memories" of substances they have come into contact with, even when they've been highly diluted.

Except, that's not how things work. May Nyman, a chemistry professor at Oregon State University, spoke with Live Science in 2017 on the subject, specifically that it doesn't make any sense at all. "I don't believe in water memory, because water molecules move. They're constantly rotating with respect to each other, forming hydrogen bonds, breaking hydrogen bonds," Nyman explained to the outlet. "Introducing ions certainly can change the pattern of bonds. But the further out you get from a single ion in the solution, the more muted the effect. Just a few layers of water, and the water molecules further away will ignore that ion."

Basically, according to Live Science, there isn't a structure in water that's permanent enough to make up any sort of long-term memory. Just like talking snowmen and princesses with magical powers, "water memory" is just another fantastical concept in Frozen 2. But even though it's not real, you have to admit, the concept of "water memory" makes for seriously compelling fairytale fodder.