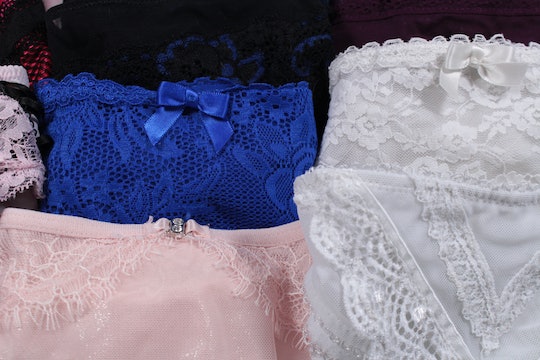 Visible panty lines are a bit of a fashion faux pas. Luckily, there's one easy way to avoid them: wearing thong underwear. Even though thongs might give you the smooth look you want, they're not always super comfortable. In fact, they can even come with some health risks. If, however, you're trying to get pregnant and wondering "can thongs hurt conception?", you may be in the clear.

There doesn't seem to be any evidence to suggest that wearing a thong will prevent sperm from meeting egg. When it comes to conception, the female's underwear choice is less of a concern than the male's. According to Parents, men should wear loose fitting underwear because it can potentially boost their sperm count.

Still, there are plenty of other reasons you might want to retire your favorite thong or G-string once you start trying to conceive. According to Baby Med, you'll be at a greater risk for infections once you actually get pregnant. Pregnancy hormones tend to produce lots of extra discharge, and if all that extra moisture is trapped by your thong, it could easily turn into a yeast infection. That won't hurt an unborn baby, but a yeast infection can be passed along during delivery according to Baby Center.

If you do plan to keep wearing thongs, there are a couple of important tips to follow to make sure you stay comfortable and safe. When it comes to fabric, cotton is the way to go. According to HuffPost, cotton is the most breathable fabric, so it shouldn't trap moisture as much as synthetic materials do. The less moisture, the less your chances of getting an infection. You should also always make sure that your thong fits properly, according to Self. If it's too tight, it's going to leave you with chaffing and irritation and that's never pleasant.

And don't forget, there are plenty of other ways to get rid of panty lines — boy shorts or seamless panties do the job just as well as a thong, with less risk of getting an infection. No matter which style of underwear you choose, however, it shouldn't effect your chances of getting pregnant.

More Like This
Yes, It’s Possible To Get Pregnant If You Have An IUD
Pelvic Pain During Pregnancy: What Causes It & How To Deal With It
Pinterest Predicts Their Top 2023 Trends In Parenting, Beauty, Fashion, Home, & More
Festive Mommy & Me Holiday Nail Ideas To Try