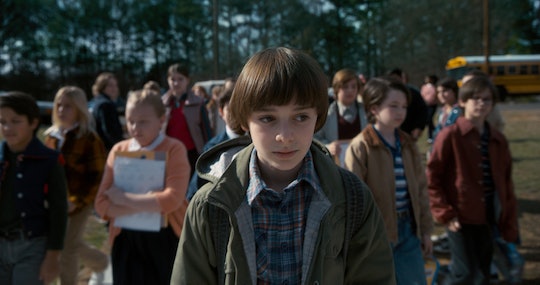 Will Is Suffering Some Serious Side Effects On 'Stranger Things'

Warning: spoilers from Episode 4 ahead! The Upside Down has been haunting Will on Stranger Things ever since he returned from it. At the end of the first season, he was coughing up strange substances in his bathroom; throughout the earliest episodes of Stranger Things Season 2, he was suffering horrifying visions. But has the Upside Down changed him even more drastically? Does Will have powers on Stranger Things? Something unusual has been going on with him, but he doesn't appear to have abilities in the way that someone like Eleven does. Whatever is happening to Will is different.

Though his doctor (from the untrustworthy Hawkins Labs) insisted Will's visions were only trauma-induced flashbacks, it soon became apparent that this was not the case. Will seemed to be shifting between both worlds, flickering into the Upside Down just long enough to see the newest danger growing stronger: a massive shadow monster that spreads its vine-like tendrils throughout the town and destroys everything in its path. Will evaded the monster at first, but after a well-intentioned heart to heart with Bob, he finally tried to face it at the end of Episode 3 in hopes of sending it away for good. Unfortunately, Will taking a stand had the opposite effect and the monster burrowed itself into his body.

That left Will with some new skills, but they were not dissimilar to the ones he'd already been dealing with after his first trip to the Upside Down. He's still having visions, only instead of being intermittent, they seemed to be constantly happening in the back of his mind now; the creature is using him as both a host and a window, allowing Will to see into both worlds and presumably letting the shadow monster do the same. Will also has to make his home habitable for the monster by avoiding the heat and keeping things cold.

Those things are all new for Will, but it's difficult to describe any of them as "powers," especially when comparing him to other characters who do have more traditional special abilities. Eleven can move things with her mind and mentally visit people in other places using radio or television waves. While she and Will are both technically having visions of concurrent events, the visions manifest in totally different ways. Will's happen to him, without him actively trying, while Eleven is able to conjure and control hers. Will doesn't seem to be able to do any of the other things she can do either, at least not by the end of Episode 4.

It's still early in the season, so Will's abilities (such as they were) could always continue to grow as the monster's hold on him increases. Much like tiny adorable Dart became a big, scaly, cat-eating monster, Will could undergo an evolution that lends him greater (and more terrifying) powers. If the monster's influence over him becomes stronger and more difficult to fight, then Will could find himself in possession of all manner of Upside Down abilities.

Throughout the second season of Stranger Things, all of the characters are reeling from the events that have so utterly changed their lives, but Will's future is more uncertain most. He was rescued from the Upside Down, but it left him undeniably altered and it isn't easy to determine how drastically he's been changed by what happened. Will is dealing with things he doesn't totally understand, which means it's also hard for the audience to determine what direction the show will take in his storyline.

Will has increased capabilities for now, but they're the result of the monster taking up residence in his body. They might not last forever and they could also mutate at any moment. The only thing that's certain is that whatever Will's going through isn't over yet.