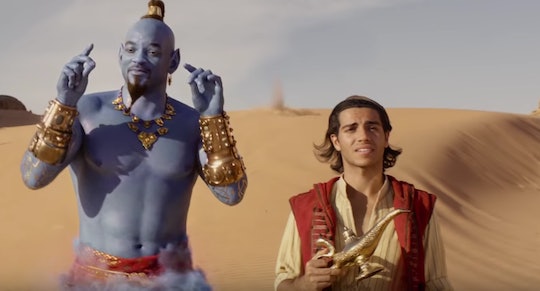 The new live action remake of Aladdin is just days away from premiering. Next week, fans of the beloved Disney animated classic from 1992 will get to watch it in a whole new way. Will Smith stars as Genie in the film, and people are already looking forward to his performance. So, of course, some are already wondering — does Will Smith sing in Aladdin? I think the answer to that question is obvious — and luckily, people can hear some of that singing now before the film hits theaters next week.

Aladdin is a Disney film unlike any other. In the film, Aladdin, a "street rat" tries to win over the affection of Princess Jasmine, with the help of a genie. The film is more than a love story, it's a hilarious and fun musical filled with so much color and so many amazing songs. Genie, played by Will Smith, helps bring the fun to the film — his dance numbers and jokes on screen bring so much life to the movie. And now, people are getting a glimpse of that ahead of the film's release, thanks to a new clip from the film, released on Tuesday.

In the clip, released by IGN on Twitter, Smith performs (some of) his big number from the film "Prince Ali." The entire thing is super colorful, catchy, and fun.

Sure, it's not an exact shot-for-shot remake of the original animated song sequence, and Smith's voice isn't exactly like Robin Williams, who voiced Genie in the original film. But, it isn't awful by any means. The entire sequence looks gorgeous, and Smith is clearly bringing his own take to the song in this new film.

This interpretation of the character was done on purpose. In a December 2018 interview with Entertainment Weekly, Smith told the magazine that he wanted to bring his own style to the character and the classic songs, to differentiate between the character originated by Williams. "I started to feel confident that I could deliver something that was an homage to Robin Williams but was musically different," he said. "Just the flavor of the character would be different enough and unique enough that it would be in a different lane, versus trying to compete."

Since this new remake of Aladdin has some brand new characters (and new songs) in the film, it makes sense that Smith would take a slightly different approach to the genie. "I think it'll stand out as unique, even in the Disney world," he added. "There hasn't been a lot of that hip-hop flavor in Disney history."

But, people on Twitter had some pretty strong reactions to watching the "Prince Ali" clip. It's safe to assume that people are a little wary of watching the new film.

Did I mention they're just a little upset?

It's been a while since people have heard Smith sing on screen or release a new song. Smith's musical career predates his acting career — he released his first hit song in 1986 and kept the hits coming long after that (who didn't love his 1998 song, "Gettin' Jiggy With It"?). But, Smith's last album debuted in 2005, according to Billboard, and he has taken a bit of a hiatus from his singing career, since.

This means that Smith is making his big return to music in Aladdin. Hopefully, people won't be too disappointed in his spin on the Disney classic, even if this clip wasn't as promising as they wanted it to be.