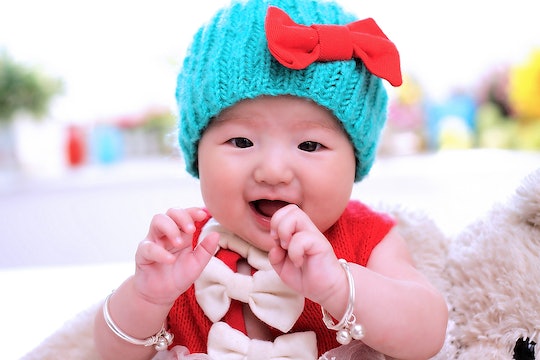 Does Your Baby Have Emotions Or Are They Soulless?

Though it might seem like your baby only knows how to sleep, eat, and poop in those first few months of life, it might surprise you to find out that your baby's born with quite a few impressive traits and immediate knowledge. So if you're wondering, does your baby have emotions, the answer is a resounding yes.

According to Dr. William Sears's website, babies can sense emotions while they're still in the womb and can even share emotions with their mothers. Additionally, Parents noted that it's normal for babies to respond to their parents smiles and voices during their first month of life. But for most babies, it takes a few months to being expressing emotions on their own terms. During month two is when most babies begin to consider expressing anger, and begin developing social smiles.

Happiness, anger, and fear are the most common three emotions that babies experience in their early stages of life according to a Parents interview with Dr. Pamela Cole. And it makes sense that these are the first three emotions your baby will learn, as they're the most common emotions tied to basic needs and wants as a human. Between 3 and 6 months is when babies start to develop their expectations, according to Cole. Something as simple as seeing a ball and expecting mom to roll it towards them can create a sense of anger and disappointment when mom doesn't roll it toward them. Basic fear tends to develop between 6 and 8 months, since fear is a learned emotion and not a basic instinct. Once your baby starts developing their memories and being able to recall situations both good and bad, their sense of fear will develop, too.

According to Healthy Children, early social engagement is an incredibly important part of developing your child's emotional intelligence. Through socialization, your baby will learn and experience many different people and reactions. Though they may not coo with everyone they come into contact with, socialization is still important to normalize their interactions with other people. Expanding your child's experiences is a key part of their overall development during the first few months of life. Healthy Children also recommended not stressing out too much about spoiling your child during the first few months of their lives. Though some parents are convinced that tending to your baby's every cry can create needy children, Healthy Children suggested that paying close attention to your baby's reactions and necessities show your baby a certain sense of security as their memory develops, which can in turn help them with their emotional intelligence over time.