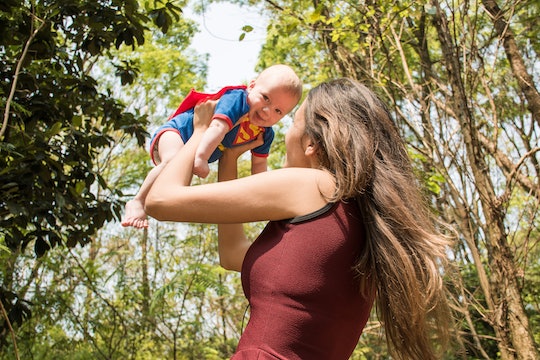 Time To Let Your Baby's Conscious Be Your Guide

As your baby grows up and becomes more mobile, they tend to get into more mischief. After all, exploring the environment around them is a lot of work. And though you've catered to their every need up until this point (picking them up when they cry, feeding them when they're hungry, changing their diaper, taking them everywhere with you), once your baby gets mobile, you'll find the need to start exercising some boundaries. But does your baby know right from wrong? Or is that constant stream of noise going in one ear and out the other?

It can be frustrating to pick that pacifier up off the floor after they've chucked it for the fiftieth time, and even more frustrating when you feel like your discipline isn't sticking with your kid. The New York Times Magazine reported that while some psychologists have long argued that humans begin life without a sense of morality, that there's a growing amount of research that points to the idea that humans are born with a moral compass. Additionally, a study done by Yale University published in the International Weekly Journal of Science showed that, when asked to pick a helpful puppet versus a disruptive puppet, babies were prone to choosing the puppet who was helpful.

So yeah, your baby is born with a moral compass. But when do they really learns what's right and what's wrong. According to What to Expect, your baby understands the concept of right and wrong around 10 months. This is attributed to the fact that around this time is when your baby's memory begins to improve, and they begin to retain more details in situations, such as words, tone of voice, and actions. They begin to carry these details over from one day to the next, which is why right around ten months is when you'll want to start teaching your baby about right and wrong.

Although you may be worrying that implementing discipline at a young age can have negative effects on your child, licensed social worker Claire Lerner told Parenting that setting limits is part of your responsibility as a parent, and that it's something that you need to do. Lerner suggested resisting the urge to yell (or laugh) when your child is doing something they shouldn't be doing, as your reaction will only serve as encouragement to them. Instead, Lerner said to tell your child in simple terms of your expectations. For example, if your little one is screaming their head off in a place they shouldn't be, explain to them that you use your quiet voice when you're in the museum, at church, in the library, and so on. "Just keep explaining the rules, and by age two and a half to three, he'll begin to understand them and be better able to act on them," Lerner said.

It's not uncommon for babies to start recognizing the concept of no at an earlier age than10 months, according to Baby Center. But that doesn't mean they'll grasp the meaning and truly start responding to the word until a later age. Between 12 and 18 months is when you can expect your child to really start grasping what no means, and seeing them stop when you ask them to.

If you begin teaching your child discipline and morality at a young age, the concepts will be ingrained in them as they begin to understand them, and grow with them as they become more independent as children. Like anything you teach your children, providing a solid, consistent foundation will help prepare them for making educated decisions as they grow up.