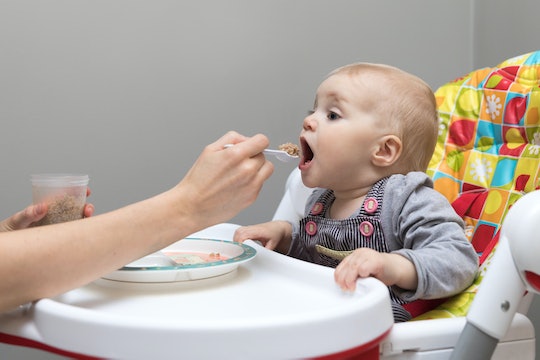 Here's What It Means If Your Baby * Loves * To Eat

Babies who fall on the picky-eating end of the spectrum get a lot of press (and cause parents a lot of worry), but what about their voracious counterparts? Not every baby turns up her nose at any offer of puréed peas or sweet potatoes, after all. Some babies are all hungry, all the time, and they have zero hesitation about trying anything and everything. But what does it mean if your baby loves to eat?

Of course, babies are just little people — and different people have appetites of different sizes. Likewise, some people are just plain more into food (cooking, trying new restaurants and cuisines, etc.) than others. But does the fact that your baby's been grabbing for your fork since long before he was even ready for solids mean that you're raising a future foodie, or is this just a baby phase? And is there some physical reason behind the fact that he always seems hungry?

As with so many things related to children and child development, there's no one-size-fits-all answer to these questions. That said, there are some possible explanations as to why your baby seemingly has a bottomless pit for a stomach.

"Starting with our younger babies, you may naturally see babies who are more enthusiastic to nurse or take a bottle," Katie Heddleston, a registered dietician and nutrition counselor who works with families, tells Romper.

"Babies are born as little intuitive eaters and we don't want to deny them of their natural cues to eat," she adds.

It could be that a zest for eating is just part of your child's overall adventurous personality, according to one study. Published in the journal Child Development, the research from Penn State showed that babies who resist eating new foods are more likely to have "inhibited personalities" (so the inverse would also apply, presumably).

"The results suggest that infant and toddler responses to new foods are based on their temperament," study author Kameron Moding said in a statement.

The study found that 6-month-old infants who showed hesitation when presented with new toys were likely to be just as reticent when offered new foods, and that these reactions persisted when the babies were observed again at 12 months of age, a consistency which supports the idea that eating habits and personality are linked.

If, however, your baby's outsized appetite seems to wax and wane, those bouts of hunger could be linked to something more temporary than temperament; namely, a growth spurt. As Michelle Lampl, M.D., Ph.D., a growth researcher and associate professor of anthropology at Atlanta's Emory University told Parents:

"A growing baby is a hungry baby — she needs all the calories she can get."

There's no fixed schedule for these spurts, the same article explains, though some experts think they generally last between two and seven days and happen at relatively predictable intervals (10 days, 3 weeks, 6 weeks, 3 months, and 6 months, particularly). Other researchers say the timing of these intense growth phases varies depends on the child. Either way, it's not just physical growth that might be making your baby hungry, Heddleston tells Romper.

Unfortunately, however, there is also a potential negative side to this trait. With all the concerns these days about childhood obesity, some parents worry that their baby's plate-cleaning capabilities could point to a future tendency towards overeating. In fact, scientists say there could be a link: Research published in the journal JAMA Pediatrics found that babies with a lower satiety response (which makes people less likely to stop eating when they feel full) were genetically more susceptible to obesity.

"It might make life easy to have a baby with a hearty appetite, but as she grows up, parents may need to be alert for tendencies to be somewhat over-responsive to food cues in the environment, or somewhat unresponsive to fullness," lead scientist Professor Jane Wardle was quoted as saying in The Huffington Post.

"This behavior could put her at risk of gaining weight faster than is good for her."

Still, that doesn't mean you need to freak out if you've got an eager eater on your hands. It's all about learning to follow your baby's genuine hunger cues, and helping her to do the same.

"So you may see babies loving the learning-to-eat process and you may see some babies not get super into it. You also may see enthusiastic eaters who love everything offered one day and six months in the future they become picky — this is also totally normal!"

In other words, only time will tell what sort of relationship with food your child will develop in the long run. For now, enjoy the perks of not having to battle with a picky eater!

More Like This
Baby-Led Weaning: A Comprehensive Guide To Introducing Solids
What Is RSV?
The Best Halloween Family Pajamas To Match Your Boos
30 Adorable Baby Halloween Costumes, From Animals To Avocados