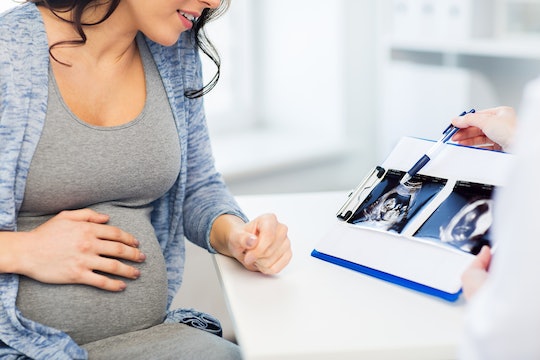 Studies Suggest Babies Touch Themselves In Utero — Here's Why

"There is no doubt that we can see the fetus touch their genital as early as 15 to 16 weeks, Dr. Sherry A. Ross, author of She-ology: The Definitive Guide to Women's Intimate Health. Period tells Romper. "There have also been isolated observations showing this phenomenon, but no definitive studies have been shown this as a purposeful movement to create pleasure." One of the observations she's referring to is a report that gets discussed in the news frequently. It was an observation made by two OB-GYNs in 1997 regarding fetal masturbation. Yes, that was a long time ago, but it bears relevance because it's been so widely talked about.

But as Ross says, babies make many movements in utero. Through 3-D imaging, I was able to see my baby clasp her hands in prayer form like a little yogi at 3 months gestation. So if my baby was able to make that movement, kick, and flip in the womb, is it possible that fetuses can make intentional masturbation movements as well? And if yes, do they get pleasure from it? This is where things get even more unclear, as the medical community doesn't exactly agree on whether fetuses, especially very young gestational age fetuses, can feel sensations. Two Italian researchers published in The Journal of Maternal-Fetal and Neonatal Medicine said it seemed possible for fetuses to feel pain in the third trimester, but it was hard to conclude if they did before that time because the data was weak. That said, however, they studied pain rather than pleasure.

Another voice worth bringing into the conversation comes from Dr. F. Session Cole, a professor of pediatrics at Washington University School of Medicine and a neonatologist who cares for newborns born prematurely at 22 to 24 weeks gestation. In a TIME article, it was reported that:

Babies born in this gestational age range do respond to external stimuli, like having their blood drawn; they don’t show significant changes in their heart rates, blood pressures or blood oxygen levels. Still, he argues that it's difficult to extrapolate these results to fetuses, because the womb is a distinctly different environment.He further said that based on current research, there wasn't enough evidence to suggest that fetuses as young as 15 weeks could feel sensations like pleasure."