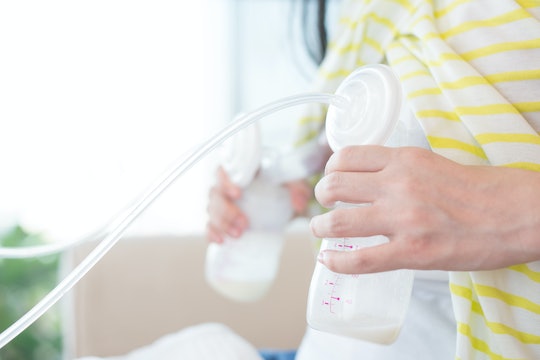 I've been known to engage in angry discussions on the internet. One of the biggest arguments I get into has to do with the privilege of breastfeeding. While I was fortunate to be able to exclusively breastfeed my children, I recognize that this was absolutely because of privilege. Many women simply cannot accommodate breastfeeding due to circumstances beyond their control — especially in regards to finances. You may know that employers are required under federal law to allow their employees time to pump, so you assume everyone can. But does your job have to pay you for pumping breaks?

According to The United States Department of Labor, your employer is mandated to give you adequate breaks of at least 20 minutes every three hours to pump, but they are not required to pay you for this time. However, they cannot deduct it from your pay if you combine it with a paid break such as is scheduled. They also must allow you to make up this time whether it is before or after your shift as their hours allow. They also cannot mandate that the time you take must be combined with pre-scheduled breaks. You are allowed to take your previously allotted break and then an additional 20 minutes for pumping.

Let's do the math to examine how much breastfeeding can actually cost you in the workplace. The most popular brand of formula on Amazon is $27 per tub, and that tub lasts approximately six days when you're using 4 ounces per feeding for six feedings. That is $4.50 per day per baby. Let's say you're making $15 per hour and you pump three times in your eight-hour work day for 20 minutes each time. You stand to lose an hour of work if you can't make it up before or after your shift. That's $15 gross, which is not accounting for taxes and childcare. That's $75 per week in lost income from pumping.

If you're making significantly more than that, it might not be as big of an economic burden. However, if you're making less than that, chances are you qualify for the Women, Infants, and Children (WIC) program that can help subsidize the cost of formula if you need it. There is no such program for breastfeeding, in spite of the push in recent years to encourage more women to breastfeed. And with a president who refers to women as "disgusting" when they choose to take time off to pump breast milk, I don't foresee any positive changes to this policy in our near future.

Does your job have to pay you for pumping breaks if they pay you for other breaks? Sadly, no. Working mothers have scant few protections in the United States, and those we do have, we've had to claw, grab, and punch the patriarchy in the proverbial manhood to achieve. Their priority is profits, regardless of the fact that our own government touts the benefits of breastfeeding on their website as something beneficial for mother and child, according to the Office on Women's Health.

Here's a hint for the dudes in the ivory towers making decisions about our boobs and our finances. If our children are healthy, we take fewer sick days. If our children have hearty immune systems, you're less likely to lose billable hours because of a bug you pick up at your grandson's soccer game.

Unfortunately, we don't have a lot of rights on this issue, and according to a report by Forbes, employers frequently break the few laws we do have regarding this issue. It continues to leave breastfeeding as a point of privilege in the United States, and the only way we can affect change in this area is at the ballot box and by calling our representatives. We must be our own advocates in this arena, and let our desires be heard.

More Like This
Is It Safe To Pump While Pregnant? Experts Weigh In
Parents Have Thoughts After Court Orders Nursing Mom To Use Bottle In Custody Dispute
Chrissy Teigen Nodding Off While Breastfeeding As Miles Chats Away Is Too Relatable
When Does A Baby Recognize Their Father? A Pediatrician Explains
What Parents Are Talking About — Delivered Straight To Your Inbox