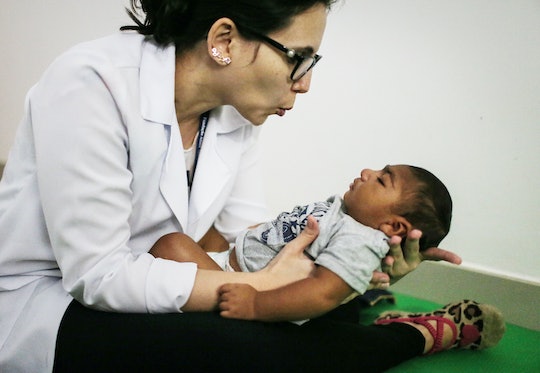 Does Zika Cause Red Eyes? Not Always

As the Zika virus continues to spread throughout the world, many people are curious about the infection's symptoms. While the virus is present in the United States, those traveling to Latin America are at a greater risk of infection. Zika, which can cause microcephaly, a disorder where babies are born with smaller heads, is believed to be transmitted through mosquito bites and sexual intercourse. Does Zika cause red eyes?

Conjunctivitis, or red and itchy eyes, is one of the symptoms of Zika. But the virus can manifest itself in other ways. Along with red eyes, the most common symptoms associated with the Zika virus are joint pain, fatigue and rashes throughout the body, according to the Center for Disease Control and Prevention.

Other symptoms include headache and muscle pain. However, part of the reason Zika is so hard to detect is that many people who are infected do not show any symptoms at all. In fact, only one in five people infected with Zika will become ill, according to the CDC.

Those who do develop symptoms, experience them for two to seven days after the mosquito bite, according to the World Health Organization.

How do you know for sure whether you have Zika?

The CDC recommends that anyone presenting the symptoms above report them to their doctor. Testing for the virus is still in its early stages. In June, a team of researchers in Pennsylvania developed a saliva test for the virus. That's particularly exciting because the test does not require electricity and costs just $2 to produce, making it more accessible to people in poorer regions.

The few tests that are currently available, diagnose Zika using the genetic material from the virus or the antibodies the body creates to fight it. That can be problematic because the test can confuse similar diseases like Dengue fever for Zika, according to Quartz.

Of course, the best way to avoid some of these debilitating symptoms is to dodge Zika all together. Those who are pregnant or plan on becoming pregnant should avoid travel to places where the epidemic is rampant, like Brazil and other Latin American countries. They should also avoid unprotected sexual intercourse with partners who have traveled to these countries in the last six months, according to the CDC.

Anyone in areas affected by the Ades aegypti mosquito, which spreads Zika, should spray repellent daily, stay in rooms with air conditioning and wear long pants and sleeves. By spraying often and avoiding mosquito prone areas, we can all help stop the spread of Zika.