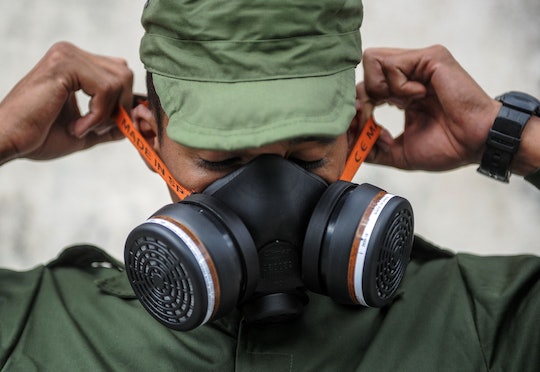 Does Zika Virus Stay In Your System Forever? Scientists Say You Shouldn't Worry

The threat of Zika virus to pregnant woman is well-known. The uncertainty of what infection could mean for both the mother and the fetus makes the growing number of cases particularly worrisome for pregnant women or women who want to become pregnant. Though it can manifest with symptoms for a short period of time, does Zika virus stay in your system forever? Scientists say no.

Dr. Sanjay Gupta and Leinz Vales reported that the Zika virus is only alive and active in an individual for approximately seven days, according to CNN. The Red Cross asked travelers to affected areas to avoid giving blood for about a month after their return, but the length of the wait is primarily just a precaution. Zika virus appears to prompt people to develop immunity after they've had it once, making it unlikely that the virus will cause problems later. Women planning to get pregnant likely do not need to worry if they've had the virus; according to CNN, future pregnancies won't be affected by a past Zika infection.

Currently, active Zika virus transmission does not appear to be a major threat in the United States, according to the Centers for Disease Control and Prevention. The areas of largest concern are concentrated in Central and South America, Oceania/Pacific Islands, and Cape Verde in Africa. The virus made news when Brazil discovered a substantial increase in microcephaly cases beginning in May 2015, the CDC reported. The link between Zika virus and microcephaly hasn't been definitively proven, but the correlation is strong enough to warrant international concern.

Zika virus symptoms may include fevers, headaches, rashes, conjunctivitis, and joint and muscle pain, according to the CDC. In extreme cases, more substantial manifestations of Zika virus may develop; according to USA Today, this includes paralysis and meningoencephalitis, a type of brain inflammation. Often, individuals with the virus experience no symptoms at all. For this reason, it's particularly important for pregnant women who've been in affected areas to be tested. If a woman planning to become pregnant lives in or traveled to an affected area, she may also want to consult a doctor before moving forward in order to guard against undetected infection.

The level of fear surrounding Zika virus seemed to escalate over the last few months. Women in El Salvador have been advised to avoid pregnancy for two years, according to the Harvard Health Blog; other countries are advocating a similar approach for shorter periods of time. Though the implications of infection are significantly disconcerting, women can take comfort in knowing that getting the virus before pregnancy should not lead to complications later. According to the CDC, the future immunity granted by contracting the Zika virus may mean that infected women in affected areas will be able to have peace of mind going forward.