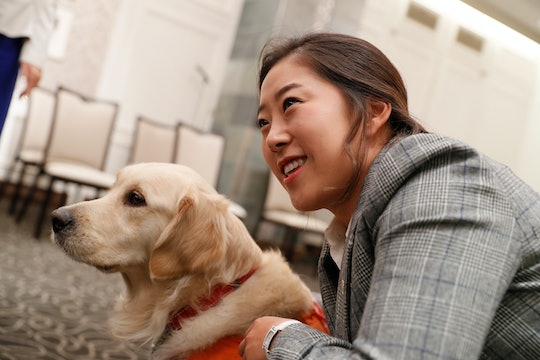 Man's best friend? More like woman's best friend. According to a new study, dogs may help women sleep better than other people when it really comes to getting some really good rest. Now, this might sound a bit funny... until really think about it. Dogs toss and turn less than a human partner (though they might get up and walk around a bit in the middle of the night), plus dogs never try to stay up late on Facebook or keep on another old episode of The Walking Dead, do they?

So I'm prepared not to doubt this news, even though it does sound far-fetched at first. The new study, from researchers at Canisius College in Buffalo, New York, found that certain patterns correspond to females getting a solid batch of zzz's.

As the study detailed, having a dog next to you instead of a human partner might work better for women for several reasons. For one, dogs actually provided an increased sense of comfort and security than humans, the study found. For another, as the New York Post detailed, dog owners tend to go to bed earlier and stick with a routine, which would therefore correspond with waking up well-rested and ready to go.

The study also found that dogs were less likely to wake up or otherwise bother owners in the middle of the night than either cats or humans.

“Dog ownership and its associated responsibilities may cause individuals to adhere to a stricter routine,” the research team wrote, according to the New York Post. “Keeping to a consistent sleep schedule may be beneficial to dog owners.”

Interestingly enough, the new study found that cats who slept in their owner’s bed were just as disruptive to a woman's sleep as a human partners. The report noted that felines brought up weaker emotional associations regarding a person's comfort or security than either a human or canine snuggle buddy for study participants. (Sorry, cat people, that's just what they found.)

Additionally, in a study published earlier this year, researchers found that women prefer their best friends to their partner, if you're really asking.

The study, sponsored by UK health and fitness company Champneys and website FEMPositive, according to the Sun newspaper, found that out of 1517 women polled in the UK, more than 50 percent claimed that their girlfriends ranked higher than their spouses when asked to rate who they are closer to.

There sometimes seem to be differences between men and women when it comes to self-care, so maybe that's part of the problem here (though, of course, you can't generalize that all women or men are a certain way just by virtue of their sex):

Between these two studies, are you getting the feeling that modern women might need a little more support in general? Between snuggling up with a dog, chatting with friends, and spending time with your partner and family, the hope would be that you're well-rested and recharged enough to take on the day and juggle each of your jobs (inside and outside of your home). How can we make sure women are getting the rest they need? Let's sleep on the issue.

More Like This
From One New Mom To Another, You Really Do Need The Hatch
Here's How To Handle Potty Training During Nap Time
Experts Explain Whether It’s Safe For Your Baby To Sleep On Your Chest
How To Tell If Someone Is Lying To You: 34 Signs To Watch For