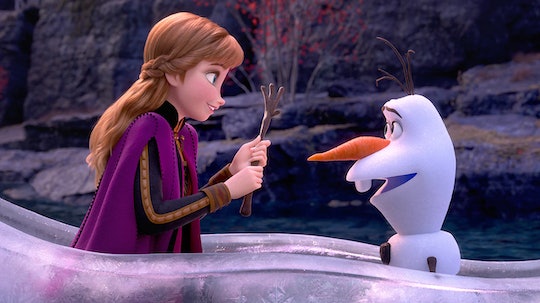 Light spoilers for Frozen 2 below.

Even if you think Olaf's "In Summer" is the most grating song since "Vengabus," and Olaf the most expendable character, I guarantee you felt something in Frozen 2 when he realized his flurry was evaporating, then flitted away into a drift. Anna's realization that this meant Elsa was likewise in danger of disappearing led us into her big number, "The Next Right Thing," a song that for parents probably cut deeper than the others. For me especially, it spoke to a dark part of my early experience as a mother.

I saw Frozen 2 not with my son, but with three other grown-ass adults: my sister, best friend, and aunt. In a cinema otherwise populated with kids in Anna and Elsa dresses, we were perhaps not the primary audience Disney had in mind, but we were an audience Disney definitely acknowledged.

I had heard that the sequel was darker than the original, and expected sister drama and maybe some residual Hans issues. Instead, there were nods to colonialism and powerful climate warnings — themes that spoke to criticisms of the original — but what I didn’t expect was the profundity of Kristen Bell’s performance singing about depression and loss at the moment in the film the sisters seem furthest apart.

Anna is typically portrayed as the light and hilarious younger sister, always there with a quick joke. She is voiced by Bell, an actor with a similar reputation (she famously carried a burrito in her purse to the Oscars), and a mother of two who has also spoken about her experience with depression and anxiety multiple times, starting with a 2016 op-ed in Time, in which she said of the stigma “I’m over it.” Her big song in Frozen 2 is a ballad, and it shows a different range than we saw from Bell in the original movie. Her voice wavers and breaks, and lifts up into a clearer and more powerful vibrato than we heard in the sunny “For The First Time In Forever.” Watching as a sensible adult not dressed in a shimmery blue costume, I realized I felt intensely connected to a fictional princess in a mystical forest.

My next right thing was to pump and supplement. Then it was to get out of bed the next morning to get dressed. Then to go on my first run, go through the painful practice of finding a therapist.

The song begins with Bell choking on her own sadness, gasping for air enough to hold a note (“I've seen dark before / But not like this / This is cold / This is empty / This is numb.”). But as she sings out her feelings, her voice gains strength (“Take a step, step again / It is all that I can to do”). Hearing that the character felt lost and unable to get her old life back spoke directly to my new mom self and where I was a year ago with my perfect newborn baby, Anderson.

Mental illness takes many shapes and forms but my personal combo of depression and anxiety found me when I was six weeks postpartum with my son. The weight landed while I was breastfeeding in the middle of the night with a baby who just wouldn’t latch and in the moments it felt overwhelming to think about the daycare where we couldn’t nail down a damn spot. I found in myself a fear that I used to judge others for having. I was terrified that I’d never have my life back.

It all became a dark hole I feared I’d never get out of. This was the panic speaking: I just needed to find the steps. Just as Anna found the strength to rise from the floor (a tiny voice whispers in my mind / "You are lost, hope is gone / But you must go on / And do the next right thing"), my next right thing was to pump and supplement. Then it was to get out of bed the next morning to get dressed. Then to go on my first run, go through the painful practice of finding a therapist. Ultimately, I was prescribed medication and found myself through running races regularly again. Little by little, after taking small steps and breaking it down into choices that I could make, I was able to find my way out of the cloud.

I wish that I had this anthem when I was in my darkest place.

I wanted to stand up and hug Anna when she was encouraging herself to find her next breath and step, knowing that nothing would ever be the same again — a direct rebuke to her earlier tune, “Some Things Never Change,” the kind of well-intentioned lie we often tell our kids. The truth is that sometimes things happen that will make the future look much different than what we’re used to. After all, parenthood required us to cross that ocean in the first place.

I wish that I had this anthem when I was in my darkest place. I’m proud to say that today, I feel like I’m OK. I’m excited that I’ll be able to show my son a character who is dealing with her own struggles and encouraging everyone to take every single day one step at a time — no matter how big that next step feels. This chapter of the Frozen saga was just as much for the parents as it was for the kids. It was about what one generation hands off to the next, and I can’t wait to give this to my son.