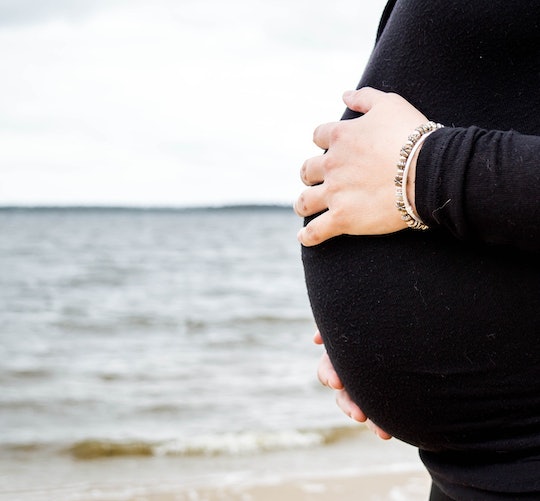 Doing This During Pregnancy Could Even Hurt Your Grandkids

Being pregnant comes with a lot of "don'ts." Expecting mothers are told not to do so many things — don't eat shellfish, don't take certain medications, and don't drink alcohol. But as it turns out, there's a very good reason for that last recommendation: Alcohol can do more than just potentially harm your fetus — it can have a multigenerational effect, too. According to new research, drinking wine during pregnancy could even hurt your grandkids and great grandkids.

There is nothing more tempting than one glass of red wine at night time to wind down — but pregnant women might want to reconsider sneaking a few sips after reading this new research. The study, conducted by at the University of California, Riverside, concluded that when a pregnant woman drinks, her grandchildren and even great grandkids could experience developmental effects from it, even years later.

Here's how they came to that conclusion: The researchers observed how alcohol exposure manifested on three generations of mice and found that all three generations born to the mice that consumed alcohol showed some kind of developmental and behavioral issue — even if their own mother didn't drink while they were in utero. Drinking alcohol while pregnant, according to the Centers for Disease Control and Prevention, could cause Fetal Alcohol Spectrum Disorders (FASDs), which are not limited to intellectual, physical, and behavioral disabilities. One in 20 school children in the United States may have FASDs, according to the CDC.

The behavioral impacts of drinking while pregnant were noticeable on even the third generation of mice. Kelly Huffman, psychology professor at University of California, Riverside, and the study's lead author explained in a press release for the study:

We found that body weight and brain size were significantly reduced in all generations of prenatal ethanol exposure (PrEE) animals when compared to controls; all generations of PrEE mice showed increased anxiety-like, depressive-like behaviors and sensory-motor deficits. By demonstrating the strong transgenerational effects of prenatal ethanol exposure in a mouse model of FASD, we suggest FASD may be a heritable condition in humans.

This news might feel contradictory for some expecting mothers, who have been told by other studies that it is OK to have a glass of wine during pregnancy. One 2014 study even found that expecting mothers who drink moderately "have children with better mental health than children of mothers who abstain," according to Today. But those reports should be taken with a grain of salt. Both the American Academy of Pediatrics and the CDC recommend that there is absolutely no amount of alcohol that is safe to drink during pregnancy and that there is absolutely no time when it is safe to drink alcohol during pregnancy either.