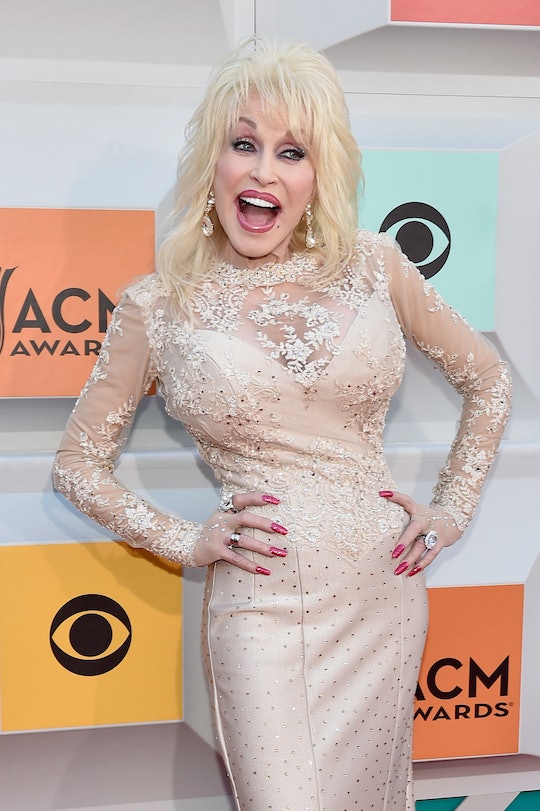 Everybody loves Dolly Parton. You don't need to be a country music fan to adore the beloved star — hell, you don't even need to be a country music singer to bow to Parton's perfection. Proof? Pop music's very own Katy Perry. The twosome will duet at the Academy of Country Music Awards on Sunday evening, and Dolly Parton described Katy Perry's reaction to meeting her, and Perry did what basically any of us would do: She totally lost her cool. But uh, can you blame her? Parton told ET Canada on the ACM red carpet that Perry "just squealed" after meeting her, and to be totally honest, I don't fault Perry for that reaction. And I'm certainly not surprised. If I met Parton, who is basically the Empress of country, I'd do a helluva lot more embarrassing things than squeal, but that's a story for a different time.

Parton — who is 70 years young and every ounce as fabulous now as she was at 20, 30, 40, 50, and 60 — was inducted into the Country Music Hall of Fame in 1999. She's taken home eight Grammys, seven ACM awards, three American Music Awards, and 10 CMA awards. She's also Miley Cyrus' godmother. Jennifer Nettles, one part of the amazing Sugarland duo, told CMT why she loves Parton's power as an artist:

I really love, as a woman, that she’s kicked the doors open in country, when you think of a song like "Jolene," for example, and how it was bold at the time. To talk about that circumstance of that love triangle and to really be honest and say "Don’t take him, ‘cause I know you can, but please don’t, he’s all that I have," that’s raw and human, and I just love that so much.

Parton is not just iconic in the country realm. She's been an inspiration to women everywhere for making her own choices, forging her own path, and never giving a damn about what anyone else thinks. In an interview with People Country, Parton said she and her longtime partner, Carl Dean, made the decision not to have children:

I grew up in a big old family with eight kids younger than me and several of my brothers and sisters came to live with me early on in my life. I've loved their kids just like they're my grandkids, and now I've got great-grand-kids!... I often think, it just wasn't meant for me to have kids so everybody's kids can be mine.

So, yeah, meeting a woman who's done so much for not just country music, but for women as well, would make anyone — famous or otherwise — freak the hell out. Can you even blame Katy for having such a raw, honest, and natural reaction?